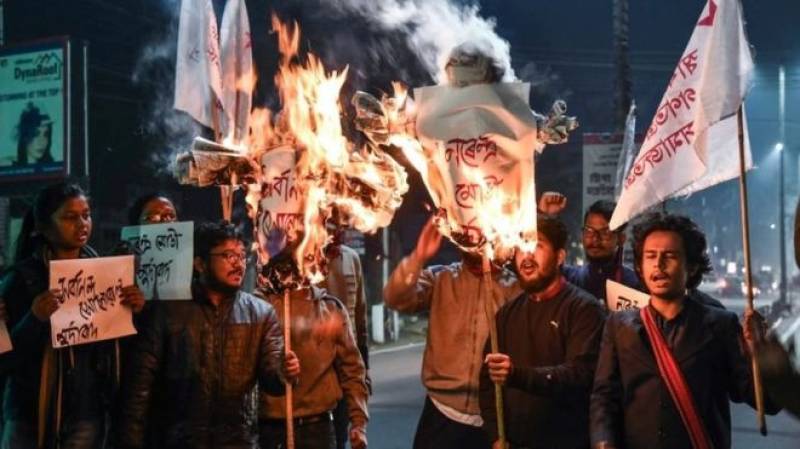 In a tweet on Tuesday, Khan said it is part of the RSS Hindu Rashtra design of expansionism propagated by the fascist Modi government.

We strongly condemn Indian Lok Sabha citizenship legislation which violates all norms of int human rights law & bilateral agreements with Pak. It is part of the RSS "Hindu Rashtra" design of expansionism propagated by the fascist Modi Govt. https://t.co/XkRdBiSp3G

Meanwhile, in a statement, Foreign Office Spokesperson Dr Muhammad Faisal dubbed the Indian legislation regarding citizenship right to minorities excluding Muslims as a glaring attempt to interfere in neighbouring countries with malafide intent.

He said the legislation that offers Indian nationality to the nationals of Pakistan and two other South Asian countries except Muslims is premised on a falsehood and is in complete violation international covenants on elimination of all forms of discrimination based on religion or belief.

Dr Muhammad Faisal said the Indian legislation has also, once again, exposed the hollowness of the claims to secularism and democracy.

In India, hundreds of demonstrators closed down streets in northeastern India on Tuesday in protest of a controversial legislation regarding citizenship right to minorities who immigrated to the country illegally.

According to reports, protesters blocked traffic across the state of Assam, including in the state capital Gauhati, by burning tires and sitting on roads. Shops and businesses closed and several vehicles were vandalized.

The shutdown was organized by the North East Students Organization, an association of student groups from across India's eight northeastern states.