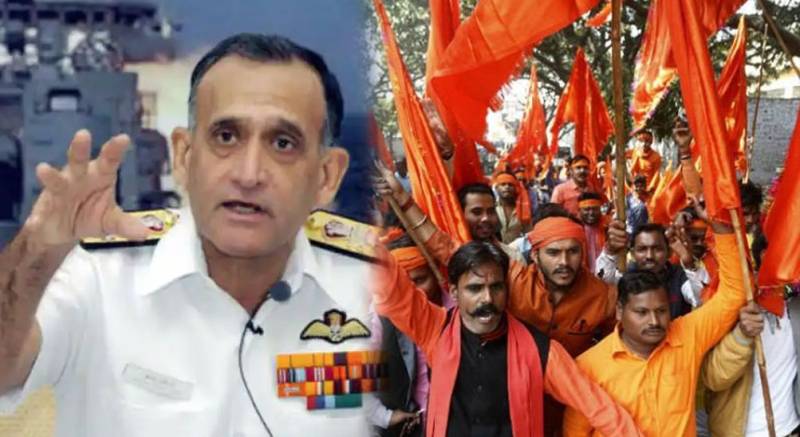 Speaking with The Wire, the former senior military commander questioned the silence from the country’s political leadership after calls for ethnic cleansing.

Prakash termed the silence ‘ominous’ saying there should be outright condemnation and firm action. He warned that the next step could be conflict. When asked if this meant India could face a civil war, he said yes, indeed.

The ex-top naval commander along with three other former Naval chiefs and a former Indian Air Force chief wrote an open letter to Indian Prime Minister Narendra Modi and President about the calls for genocide and ethnic cleansing. He also revealed that not a single former Indian army chief was willing to sign the letter.

When asked if he received any response from either, he replied, “None so far (and) it’s futile to expect one”.

Former navy chief, Admiral Arun Prakash talks to Karan Thapar on a letter he signed, along with four former naval and one former air force chief, condemning a call for ethnic cleansing of Muslims.

Not a single former army chief agreed to sign. Shocking!!https://t.co/VGsESJztlE

Call for genocide and ethnic cleansing is something they agree with or because they are apprehensive of the consequences of signing such a letter, he opined in an exclusive interview with an Indian leading publication.

He mentioned that soldiers from all faiths are serving in forces. “Think what goes on in a soldier's mind? Such talk will send a message of deep disquiet to the armed forces”, he said.

In December 2021, Hindutva leaders called for the ethnic cleansing of Muslims at a three-day hate speech conclave. Hindutva leader Yati Narsinghanand organised the conclave from 17 to 19 December in Uttarakhand's Haridwar city, where several speeches were made to attack religious minorities and their worshiping spaces.

"Economic boycott won't work. Hindu groups need to update themselves. Swords look good on stage only. This battle will be won by those with better weapons," the conclave's organizer said.

“The only subject of this Dharam Sansad is that in 2029 the PM of India will be a Muslim. This is not a baseless thought… The way the Muslim population is increasing and our population decreasing, in seven-eight years, only Muslims will be seen on the roads," Narsinghanand said, according to Indian Express.

ISLAMABAD – Pakistan has summoned the charge d’affaires of the Indian high commission in Islamabad to ...

Another Hindu leader, Annapurna Maa, suggested that killing Muslims was the only option, as he called for recruiting soldiers to achieve the task.

For his part, Hindu Raksha Sena's leader Prabodhanand Giri cited Myanmar and said that every Hindu in India should pick up weapons against the country's minorities.

"Like Myanmar, our police, our politicians, our Army, and every Hindu must pick up weapons and conduct a Safayi Abhiyan (ethnic cleansing). There is no other option left," he said, according to India media.

NEW DELHI – Noted Bollywood actor Naseeruddin Shah has said that those who are demanding Muslim genocide want to ...