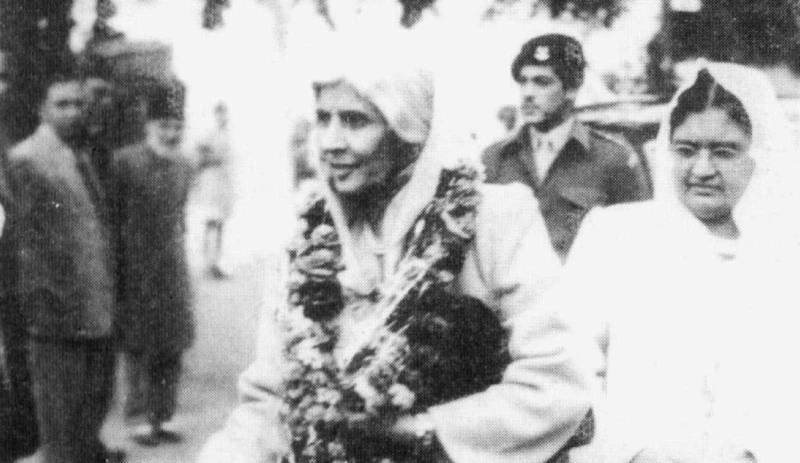 Unfortunately, as a nation we have grown accustomed to romanticizing and distorting history so that it suits our ideological aspirations. This tendency has not been without consequences on the rest of society and the reputation of certain historical icons.

Fatima Jinnah is one of the central and most inspiring characters in the story of Pakistan's birth. Seen as the natural successor of her brother, she was loved and revered by the masses. She had been Jinnah's guardian and political companion during the Pakistan Movement and was a passionate political worker, a determined women’s rights activist and a qualified dental surgeon, both before and after her brother's death.

She contested the 1964 general elections at the age of 71 against the military dictator, General Ayub Khan.

But despite being the sister of the Quaid and holding a significant political position, her life largely remained mysterious and was riddled with many intriguing and controversial episodes. Despite being the national heroine, her life has always been speculated about rather than researched.

After the achievement of separate a state, Miss Jinnah, now a Pakistani, had to deal with a series of disappointments, disillusionment and eventual isolation.There were forces against her and they ensured that her voice was suppressed through various means.

Miss Jinnah was also accused of being an Indian and American agent by the Military dictator Ayub Khan.

After Quaid-e-Azam’s demise, rulers of the time did not give the deserved respect and status to Miss Fatima Jinnah. Two death anniversaries of the Quaid had passed, but Fatima Jinnah would not address the nation only because the administration would ask for her speech to be reviewed before broadcasting. This she never accepted. The rulers were afraid she would criticise the government or say things which shouldn’t be said.

Finally, in 1951, when the administration agreed to her demand, she went on air. It was Mr. Jinnah’s third death anniversary. During the speech, at one point, the transmission was stopped for some time. It then resumed after a while. It was later known that the parts of her speech in which she was criticising the government were censored and she did not get to know this during her speech.

Renowned lawyer, Sharifuddin Pirzada (who was a secretary to Jinnah), had once said that when Miss Jinnah appeared on Radio Pakistan to announce her brother’s death, the state-owned radio channel’s director-general, Z A. Bokhari was pressurized by government official to switch off Miss Jinnah’s speech the moment she began criticizing the government’s insensitive attitude towards the founder of the country and how he was left to die in an old ambulance.

In the book Mohtarma Fatima Jinnah: Speeches, Messages and Statements (1947-67), compiled by Jamil Ahmed, there are letters exchanged between Z.A. Bukhari and Ms Jinnah.

The book supports the argument that Miss Jinnah was deliberately censored for political reasons.

Z.A. Bukhari later wrote an apology letter to Miss Jinnah, to which the latter gave a sharp response:

On the 11th of September, you had requested the copy of the broadcast which was duly sent to you at 7:00pm. At 8:00pm you had called on me at my residence in a stressful condition. With sad expressions, you had requested that I omit certain parts of my speech. To which I had replied, sans any emotional aspiration, that if one does not enjoy the freedom of expression in a democratic country, I would like to withdraw my speech instead of changing it, as it was on your request that I had agreed for the speech in the first place.

As usual, you asked me to listen to the recorded speech after the broadcast, which sounded perfect. It is astonishing that neither you, nor anyone from your staff even mentioned the technical problem in the transmitters at that time. I came to know about the technical problems while I was on my way to my residence. It is also a matter of wonderment for me that the very sentences that you requested to omit from the speech were the ones which could not be broadcast due to the technical problem.

It seems your transmitters are very obedient and submissive as they are always ready to create technical problems in order to facilitate you.

The people who tried to create problems in my original speech, and stopped my voice from reaching the people, and tried to omit certain sentences of my speech, have in fact highlighted the importance (of these sentences) to the people. You mentioned in your letter that your regional stations reported about the flow of my speech. Had it been so, you would not have taken the trouble to apologise.

As far as complaints by the people are concerned, it is your duty to satisfy them. Your explanation is neither satisfying, nor assuring. In such a case, an apology is merely a soft version of pleading guilty and admitting to one’s crime.

The next day, newspapers were full of condemnations and criticism directed at the broadcaster. Although the Radio Pakistan administration maintained that the pauses in the transmission were due to specifically power outages, no one believed them. But everyone assumed that Miss Jinnah was deliberately censored from saying the things she wanted to bring attention to.

According to Miss Jinnah, Quaid faced his first surprise after his famous Aug 11 address to Pakistan’s Constituent Assembly (in which he had spelled out his vision of Pakistan being secular Muslim-majority state), the bureaucracy of the time (pressurized by Muslim League’s leading members), asked the country’s print media and radio to only publish and broadcast a fabricated version of Quaid's speech.

One of the most authentic accounts of her disappointments is recorded in the book that she wrote in 1955 (My Brother), which was only published 32 years later, in 1987. It is believed that this was due to pressure from the establishment but some evidence suggests that Miss Jinnah herself hesitated to publish it.

But at the time of its publication Mr Sharif-ul-Mujahid of the Quaid-i-Azam Academy deleted some of the pages from the book. “Those pages were against the ideology of Pakistan and I had to take care of it,” he said, under the apparent assumption that Fatima Jinnah was not aware of the ideology of the country she had struggled for.

But luckily those pages were published in Qudratullah Shahab's Shahabnama: 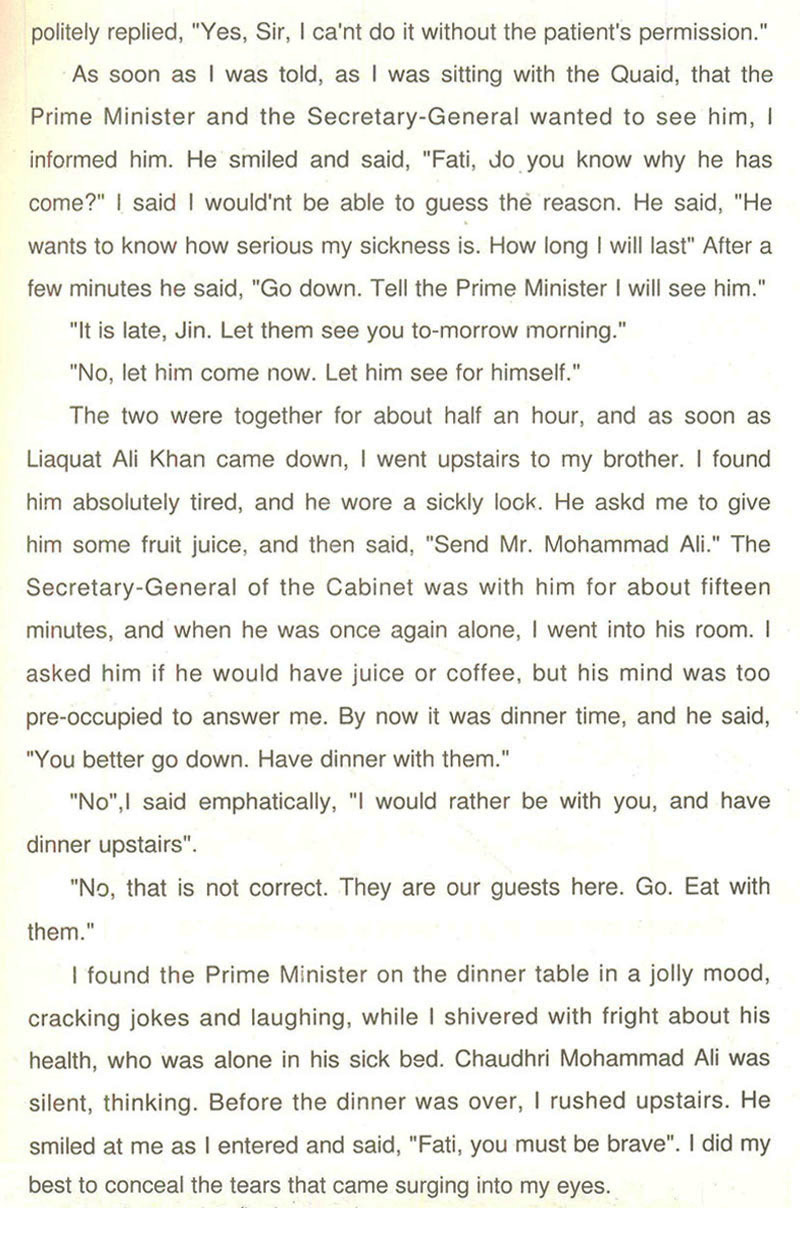 These were the passages which according to Sharif-ul-Mujahid violated the 'Ideology of Pakistan'.

According to Miss Jinnah’s book, the Quaid began to lose his health more rapidly after 1947. She believed this was because he felt betrayed by some of his closest comrades.

She wrote that her brother had revealed to her that many of his former colleagues were coming to meet him only to determine when he would die.

Fatima Jinnah died in Karachi on 9th July 1967. The official cause of her death was reported as heart failure, but evidence and accounts suggest she was murdered at her house. It is claimed that some officials of the Karachi police had found her beheaded in her drawing room.

Fatima Jinnah was seen in sound health at a wedding ceremony she attended on July 7, 1967. However, on July 9, it was suddenly announced that she had passed away. No common man was allowed to go near her dead body during her funeral. No one was even allowed to see her face for the last time before she was buried. Those who tried to do so, were baton-charged and dealt with tear gas.

Some people reported that there were visible marks of wounds on the body of the mother of the Nation. 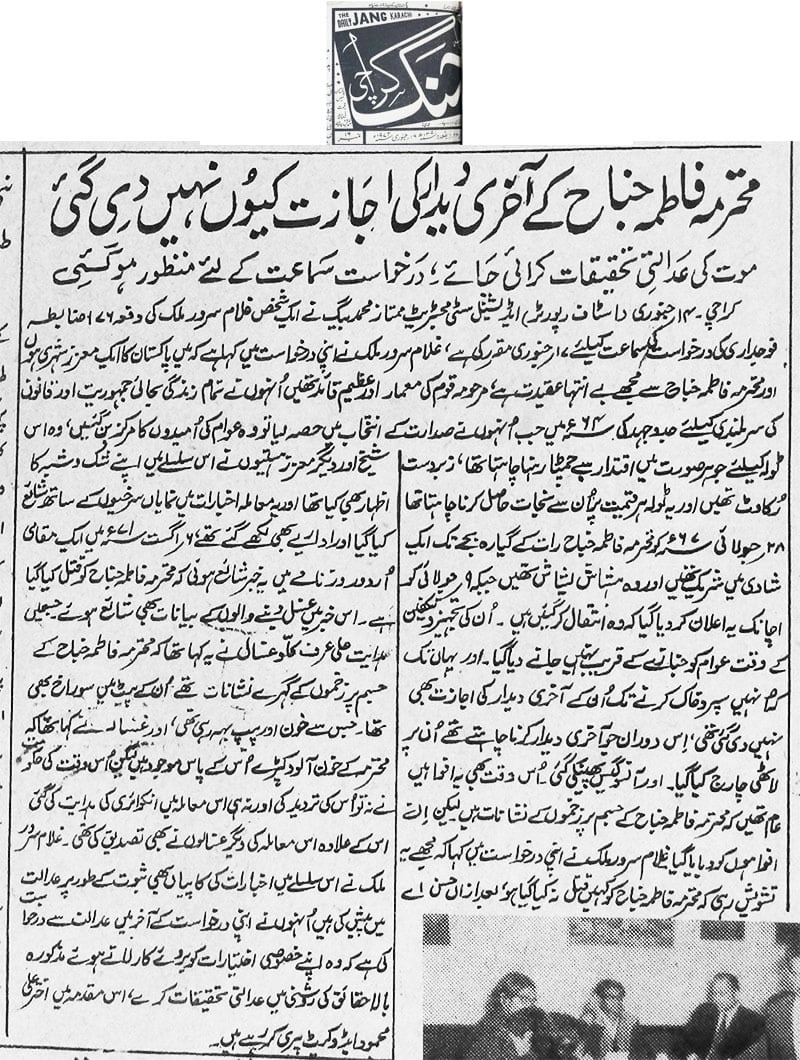 Miss Fatima Jinnah had expressed it while she was alive that after her death she be buried next to her brother. Now the problem was where to bury her, since according to Mr Abul Hassan Isfahani sahib, the government did not want bury her next to Mr Jinnah (M. A. H Isfahani’s interview, January 14, 1976). The government had to face tough opposition over the idea. Commissioner, Karachi was intimated that if Fatima Jinnah was not laid to rest next to the Quaid-e-Azam there will be unrest.

The Maadar-e-Millat was to be buried 120 feet on the left to the Quaid-e-Azam’s grave. It was to be a 6 foot deep, 3 feet wide grave. The surface was rocky, and so the gravediggers had to work for 12 hours straight to get the job done. Led by 60-year-old Abdul Ghani, a team of 20 gravediggers was working on Fatima Jinnah’s grave. Ghani had previously dug graves for Quaid-e-Azam, Liaquat Ali Khan and Sardar Abdul Rab Nishtar.

It was noon. The number of people now had increased to more than 600,000. The government had announced a public holiday, so more and more people were joining the procession in Karachi. Unrest in such a huge crowd seemed inevitable.

Suddenly, some people tried to come closer to the dead body. The police tried its best to handle the situation peacefully. However, there was a little ruckus. Soon after, baton charge began, followed by tear gas shelling and with people hurling stones at the police. A man died, while hundreds were injured in the episode. By 12:55pm, the burial had ended."

Akhtar Balouch in his article for Dawn Urdu writes:

In January 1972, a man named Ghulam Sarwar also petitioned a court regarding the matter. A news story on the application said that Additional City Magistrate Mumtaz Muhammad Baig had set January 17 as hearing date of an application by Ghulam Sarwar under section 176 of the Criminal Procedures.

According to the news report, Ghulam Sarwar Malik had written in his application that he was a respectable citizen of Pakistan and had utmost respect for Ms Fatima Jinnah. She was a great leader and an asset for the nation. She dedicated her life to democracy and upholding the law. In 1964, when she contested elections against Ayub Khan, she became a beacon of hope for the people of the country. She was a hurdle in the way of the group that wanted to remain in power. This particular group wanted to get rid of her by all means.

Malik Ghulam Sarwar said further that he had concerns that Mohtarma Fatima Jinnah was murdered. Later, Hassan A. Shaikh and other respected individuals, too, expressed similar concerns. The matter has also been highlighted in newspapers. Some even wrote editorials on it."

Even Jinnah’s nephew Akber Pirbhai, insist that she was murdered.

This was the sad tale of this forgotten Queen. Miss Jinnah was a Great Lady who was forced into Political and social isolation by the establishment. And the intriguing accounts of her life are extremely shocking and sad. What happened to her didn't stop there, this insensitive treatment has always been there in Pakistan, many great minds were either forced to leave or were assassinated.