REVEALED: Shocking details of meeting between Dr Saeed Akhtar and ex-CJP that led to PKLI’s downfall 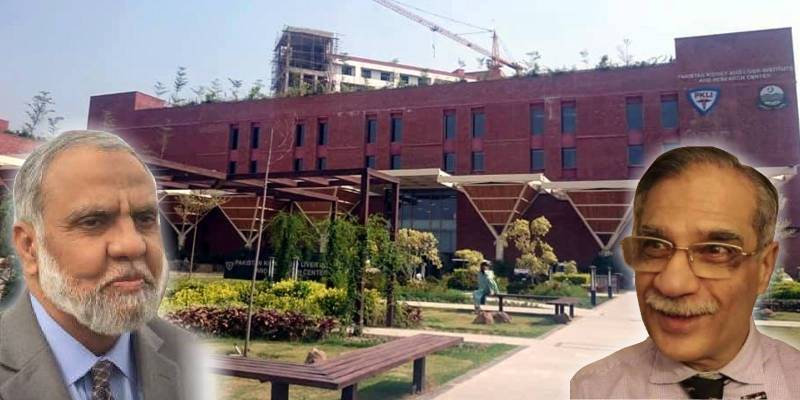 The surgery, conducted yesterday, took place nearly two weeks after a three-judge Supreme Court bench reversed all previous orders passed by former chief justice Mian Saqib Nisar in a suo motu case against alleged corruption in the PKLI and huge salaries of its president and other staff.

Roughly a year ago, the ex-CJP had taken notice of the disparity in salaries paid to doctors in public hospitals versus those employed by the PKLI, the brainchild of Dr Saeed Akhtar.

Along with former Punjab chief minister Shehbaz Sharif, the noted urologist was hit hard by the top court in a subsequent hearing, when it learnt from the Anti-Corruption Establishment (ACE), which was ordered to hold an inquiry into the alleged irregularities and misappropriation of funds at the institute, that the PKLI project was supposed to complete by December 2017.

“The former chief minister, out of affection, gave the hospital's [charge] to some doctor,” said the then-CJP, who was heading a two-member bench, in December 31st hearing. “The doctor [Dr Saeed Akhtar] added to the trust some who had no role. The entire hospital is a mess.”

The PKLI president, who had acquired success and recognition in the US where he served as chairman of the Department of Urology at the Texas Tech Health Sciences Center, before relocating to Pakistan, was also barred from leaving the country after his name was placed on Exit Control List (ECL).

The former chief justice had also appointed an ad hoc committee headed by a retired judge to run the institute on behalf of the apex court and ordered amendment to Pakistan Kidney & Liver Institute and Research Centre Act 2014, only to be disbanded by a three-judge bench on Feb 28, 2019 (months after his retirement on Jan 17).

Through a two-and-a-half page order, the apex court recalled the earlier orders placing Dr Akhtar’s name on ECL while restoring the PKLI board constituted under Sections 6 and 8 of the PKLI Act.

Under the Pakistan Kidney and Liver Institute and Research Center Act 2014 promulgated by the Punjab Assembly, the PKLI is run on a not-for-profit basis by a board headed by the CM, comprising the secretaries of health and finance and 11 members nominated by a private trust.

This means that the provincial government exercises control through budgetary grants and the board dominated by private members runs day-to-day management, with the CM and relevant secretaries providing oversight but without undue interference.

The SC bench also withdrew the ACE inquiry and its report, which had recommended registration of an FIR against the management of the PKLI and others, as being unnecessary and a judicial overreach, and directed that if the anti-corruption department brings any action against anyone, the competent forum will decide the matter without being influenced by any order of the SC.

What happened at the ex-CJP's house?

As of the case is closed now, and the man behind the whole project allowed to go abroad, the details of March 11, 2018 meeting between Dr Saeed Akhtar and former CJP Saqib Nisar have been revealed for the first time by lawyer-writer Babar Sattar.

“Dr Akhtar says he had met CJP Nisar through a mutual friend, and thought prodding the SC to enforce its edicts against sale of kidneys and livers could help curtail illegal transplants that jeopardise the lives of healthy donors. The ex-CJP probably wanted ideas for his imagined crusade in the health sector. So Dr Akhtar and his wife Dr Masooma Saeed were invited to his house along with Sheikh Amin (CJP Nisar’s class fellow and PKLI board member) and his wife,” Sattar writes in his article for The News.

He narrates the story of Dr Akhtar from an otherwise pleasant meeting that took a U-turn when Dr Sajid Nisar, the younger brother of CJP Nisar and a professor working at Services Hospital Lahore, stopped by at the place.

“Soon after arrival, Dr Sajid Nisar launched a harangue about the injustice of squandering millions on foreign-returned PKLI-types when professors in public hospitals were being paid far less,” Sattar writes, highlighting the fact that the ex-CJP’s brother “didn’t mention anything about the moonlighting income doctors get from private practice while he was dwelling on the pay disparity that perturbed him”.

After Dr Akhtar tried to defend the PKLI model and its rationale and critiqued lack of professionalism in public-sector healthcare as it stands, CJP Nisar got agitated, almost angry as the story goes on.

“While sitting in his house with guests he had invited over, the ex-CJP announced that he would take suo-motu notice of the issue his brother had just drawn his attention to. Dr Akhtar and his wife took that as a cue to leave. But the die had been cast. Within weeks, during a hearing at the Lahore Registry, suo-motu notice of all things PKLI had been taken.”

In the end, Babar Sattar questions “So just like that an ordeal that began at the ex-CJP’s house over a pre-dinner chat in March 2018 tapered off. But will the reputational harm caused to Dr Akhtar and others in this process be undone? More importantly, can the PKLI’s potential as a multi-disciplinary state-of-the-art transplant facility, offering a ray of hope to those poor and in need of transplants, be rehabilitated? Having seen the fate of Dr Akhtar and others who gave up lucrative private practices to engage with the public sector, only to become objects of scandal, will anyone else take the plunge?”

He also stresses the need of defining the scope of Article 184(3) and its exercise structured.

Why did PKLI get fried? If CJP turns on you, armed with suo moto, you're toast: you have nowhere to hide, no remedies to avail, nothing in our scheme of checks & balances will rescue you & given our culture of sycophancy no one will speak for you https://t.co/IXHjhWxbwg

The downfall and rise of PKLI

What Dr Saeed Akhtar envisioned was a state-of-the-art facility in the public domain, where those with means would pay and those without means would be subsidised by the state, to tackle the growing burden of patients with liver and kidney related diseases.

Liver disease is a significant problem in Pakistan, and in a country of approximately 200 million people, 5% (10 million) are infected with hepatitis C virus, and more than 2 million are in need of liver transplantation to save their life.

Now after delay of one and half years, the brainchild of Dr Saeed Akhtar has started bearing fruits as patients, seeking liver transplant, will not have to spend millions in foreign hospitals as PKLI will serve them now. The first sign of which is a successful liver transplant surgery by Dr Faisal Dar at the PKLI.

It was Dr Akhtar who managed to convince Dr Dar of Shifa (who set up Pakistan’s only Liver Transplant Unit at Shifa, which has performed over 700 transplant surgeries since 2012) to divide his time between Shifa and the PKLI.

In addition, the liver transplant of children will also start in June at the 11-storey building of PKLI&RC, spanning over 60 acres.