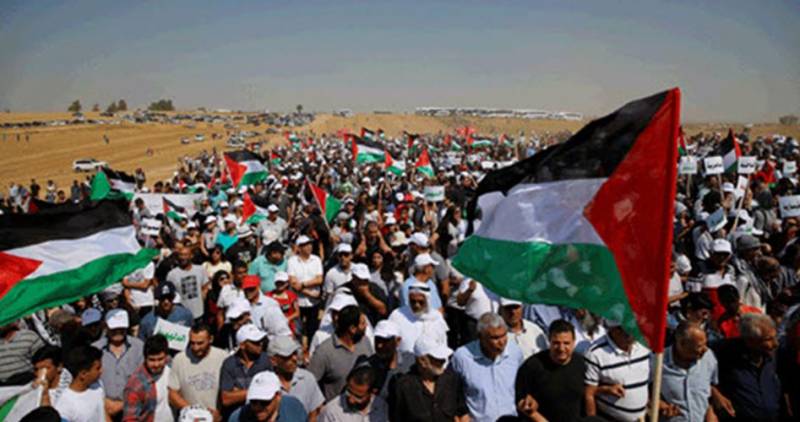 Israel expelled Omar Shakir - a senior representative of Human Rights Watch (HRW) - on 9th May. The interior ministry of Israel said that Mr. Shakir's residency permit has been terminated because he supported a boycott of Israel. However, HRW insists that neither the organization nor its representative promoted any such activities.

The time of the expulsion of HRW's representative is interesting and questionable. Israel claimed that Shakir was expelled after they kept an eye on his activities for a decade now, however, the decision to expel him only came after Palestinians called on "The Great March of Return" and reports started emerging of atrocities of the Israeli army against the protestors. HRW and Shakir call this expulsion as to muzzle the dissent.

What's "The Great March of Return" and why Israel is doing every bit of effort to oppress it?

The "Great March of Return"

On 30 March 2018, Palestinians started a six-week campaign, named as the "Great March of Return", at Gaza Strip, near the Gaza-Israel border. The campaign started on 30 March - Land Day - and will last till 15 May - Nakba Day.  This march consist of a series of protests and demand that Palestinians who have been chased out, during the 1948 war, of their homes in current day Israel be allowed to return to their homes and land. The protesters are also demanding to uplift the blockade of Gaza Strip.

Land Day is celebrated by Palestinians annually on 30 March to commemorate the events of 1976 - when Israel government announced a plan to expropriate thousands of acres of land for state purposes. In reaction to this announcement, strike and marches were organized, and during these marches, several unarmed Palestinian died at the hands of the Israeli army.

Nakba Day or the Day of Catastrophe is commemorated by Palestinians on 15 May, day after Israeli Independence Day, to remember large-scale displacement that preceded and followed the Israeli Declaration of Independence in 1948.

What are Palestinians hoping to achieve through the "Great March of Return"?

Palestinian refugees are hoping to return to their homes, from which they were forced to move out seventy years ago. The protesters are calling it their legal right to move back to their home and land.

"The 1948 war ended seventy years ago and there's absolutely no justification for the refugees to be prevented from returning to their homes," a statement issued by the protestors said, "There are international resolutions on the refugees' right of return, most notably Resolution 194, and the decision now is in the hands of refugees who will exercise their right of return in a peaceful manner whenever they want."

"There is no longer any point in waiting for just political solutions that will repatriate the refugees to their homes or prevent the occupation from further settling, land confiscation, repeated aggression, and blockade," protesters shared in the statement.

Why the "Great March of Return" remains absent from Pakistani media:

Although some media outlets reported the clashes that took place between the participants of the march and Israeli army, Great March itself remained largely absent from the media in Pakistan. When asked few journalists about this absence they couldn't come up with reasonable answers and mostly blamed it on compassion fatigue and to some extent on the myopic approach editors and journalists.

"Pakistan has its own fair share of problems and since the proximity angel of news favors local news thus news organizations focus more on national issues and International issues which - directly or indirectly - affect readers", Shared Idress, a journalist working for a national outlet.

"I'd blame it on compassion fatigue. The conflict of Palestine has been going on for so long now that readers don't give importance to it anymore. They want something fresh, something they think is solvable in a specific time duration," Waqas - editor Daily Pakistan Global - opined, "I am not saying that we shouldn't cover this issue, we just need to add a touch of freshness to it and make it relatable to our readers."

Other fellow journalists - who were asked about the march - apologized to add any comments, saying they are working on local beats and aren't aware of the matter, thus, wouldn't comment on it.

Since the world we live in is practically a global village and one nation's oppression is no longer only their problem, fair reporting on matters of oppression, crisis, and injustice should be prioritized. However, the large-scale absence of these issues in Pakistani media is a mere representation of our myopic mindset.