"Why was I removed?" Nawaz Sharif asks massive crowd in Gujranwala 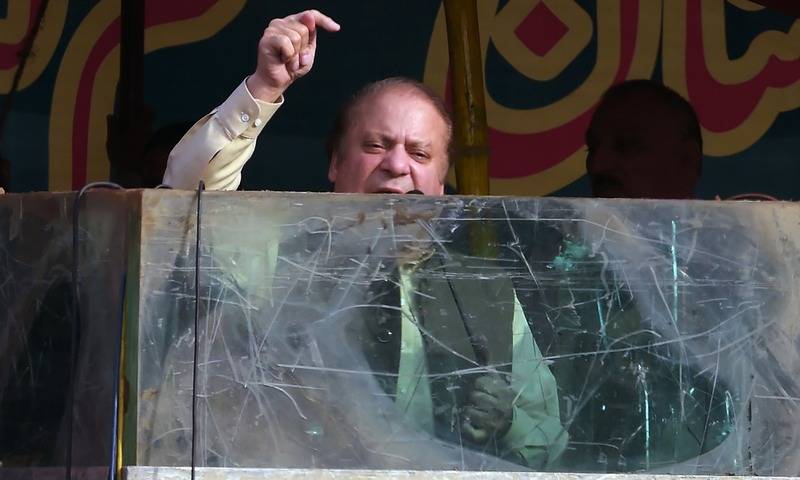 GUJRANWALA - Former prime minister Nawaz Sharif on Friday resumed his road trip back to his hometown, Lahore, via the Grand Trunk (GT) Road after an overnight stay at a hotel located on the banks of the River Jhelum.

“Should this even be called disqualification,” Nawaz asked supporters gathered in Gujranwala. “I will be made prime minister by the masses again.”

The Sharif convoy reached Gujranwala, its final destination for the day, at night, where he addressed a large crowd.

PML-N workers in Gujranwala had set up a stage and sound system for the former premier to address his loyalists.

According to the schedule issued by PML-N, Sharif will spend the night in Gujranwala and leave for Lahore in the morning. He is expected to reach Lahore at 4 pm on Saturday.

"Will you bring back Pakistan's honour?" he asked his supporters. "Will you demand that your vote hold its value?" he asked to resounding cheers.

"They've only removed me on paper. Is this removing me at all? [If it were up to you] you would make me prime minister again tomorrow. However, it is not my goal to be the PM again," he said.

"My case in Gujranwala's court is to find out why the people of Gujranwala think I was removed," he continued.

"Or was it because peace was being brought to the country?" he asked, to a resounding "no!" at each question.

"These things did not suit them [the conspirators]," he continued. "They could not tolerate this. They were thinking: 'If this continues, Nawaz will be elected again."

"Tell me, people of Gujranwala: was this not what they were thinking," he asked to a resounding "yes!"

"There have been conspiracies for the past three and a half years. When our progress sped up, the conspiracies also sped up."

"There is [still] no allegation of corruption against me. There is not a rupee of corruption linked to my name — even those who disqualified me admit that," he claimed.

"Then why did they remove me?"

"I turned this country into an atomic power. Is this how you treat someone who did that for his country?"

"They removed me twice from power before; and this time, again, I was not allowed to complete my tenure," he railed.

"Does the vote of 200 million count for nothing?" he asked.

"If there is any value in your vote, you will have to hold these people accountable," he urged.

"Pakistan's 70th birthday is around the corner. You should take an oath to never let this happen again," he said. "And when the people of Gujranwala take an oath, they stand by it. I know," he said to loud cheers.

"All those who gave the verdict [against me], look at Gujranwala's verdict!" he raged. "They do not accept it!"

"O people of Gujranwala! I know you will not disappoint me. I have faith in you and I am proud of you. I will stand by you as we do it together."

"Take an oath today. Say, we will do this together!"

"Do you accept what I say? Answer me!" he roared, inviting loud cheers of "We accept!" and "We are with you!"

"I will give you my programme — will you follow me when I do?" he asked, inviting cheers of assent.

"This is our country. We will grow and prosper together," he promised. "We will fulfill all our hopes and dreams together."

"Fulfill your promise to me, and with your hand in mine, we will take this country to new heights," he said. "Say with me: God willing, we will do this!", he said, inviting cheers of assent.

Nawaz also expressed his grief at the death of a nine-year-old run over by his convoy earlier in the day. He promised that he would visit the child's family himself and provide them help and support throughout their lifetime.

"Stay happy and stay blessed, people of Gujranwala. You have kept my honour, and I will keep yours, God willing!" he said in conclusion.

Nawaz said he will soon give youths a new line of action and asked those in attendance if they will continue to support him.

Earlier, the former PM addressed his supporters in Gujrat, and questioned the participants if they had accepted the Supreme Court’s verdict to depose him from the premiership.

In his address, the former premier mentioned his credentials during his third tenure as the premier and inquired from his followers whether they were rented or were there out of free will?

“Everyone would have become employed if I had stayed,” he claimed while kicking off his speech.

The former premier expressed that even the judges who heard the Panama case admitted that he (Nawaz Sharif) was not involved in corruption.

Basking in the warmth of a reception extended by his party members, Nawaz Sharif said that millions of people elected him as PM and a few people disqualified him.

'This joke has been repeated for the past 70 years' he noted.

GUJRAT - A nine-years-old boy was crushed to death after being run over by one of the vehicles in Nawaz Sharif’s ...

Without naming Pakistan Tehreek-i-Insaf Chief Imran Khan, he said he is aware of the conspiracy backed by certain people in Khyber Pakhtunkhwa (KP).

Talking about his disqualification, he maintained that it had happened for the third time, adding that no father takes the salary from his son.

When he inquired from his crowd whether he should stay silent and sit in his home pertaining to his disqualification, the crowd roared a ‘no’.

Nawaz Sharif asked for peoples’ support, warning them that the country would struggle if such ousters reoccur.

GUJRAT - A 55-year-old man has died of multiple injuries after being hit by a motorbike participating in the ...

He equated his public mandate with the honour of 20 million population, reaffirming his claim of being clean in his wheeling and dealing.

Before concluding his address, he chanted slogans of ‘Pakistan Zindabad’.

Earlier, talking to media, PML-N leader Talal Chaudhry said that the motorcade will reach Gujranwala today where Nawaz Sharif will address the public.

12:13 am - The caravan of ouster prime minister reached Kharian, where supporters of PML-N gave a warm welcome to their leader and shower rose petals on his vehicle.

A large number of people gathered around the caravan and chanted slogans in favour of Nawaz Sharif.

2:50 pm - The former head of PML-N's rally reached Gujrat. Nawaz Sharif will offer Juma prayers there and it would address the public gathering after prayers.

The PML-N leader is taking a long road trip, which started on August 9, back to his hometown, Lahore, via the Grand Trunk (GT) Road.

RAWALPINDI - The so called ‘homecoming’ rally of ousted prime minister Nawaz Sharif has reached Jhelum after ...

His convoy reached Jhelum at around 5pm Thursday, and the former prime minister arrived at the venue for his speech a little before 6pm.

"My government is gone now. Five judges sent me packing in one minute. Is this not an insult to the millions who voted for me?" 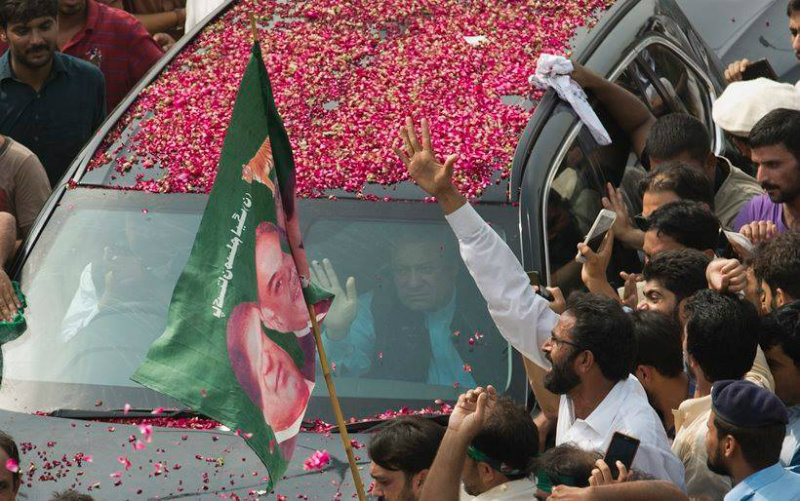 "Why did you remove me? Why? I want to ask you why you deposed me when I am not corrupt?"

"For 70 years, no prime minister has been allowed to complete his tenure. This is not an insult of your prime ministers, but of the 200 million people of Pakistan. Some dictator and some judge comes along and rips up your ballot paper and hands it back to you."

"You sent me to Islamabad, and now they [the Supreme Court] have sent me back home," he continued.

"I do not want you to install me as prime minister again. My self respect is very dear to me. I have no intention of taking power again; but I do want to do something about your future," he added. 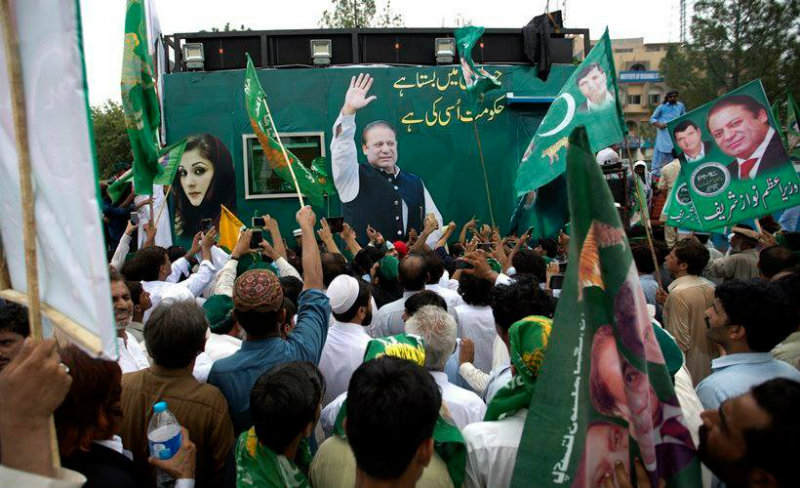 "Is there any law to tackle dictators in this country?" he asked the crowd. "They [the dictators] break the Constitution and the law and then the judges give them legitimacy. The judges tell them 'you did well by sending Nawaz Sharif home'," he alleged.

"We need to ensure that whoever you vote into power, only you have the power to kick them out." 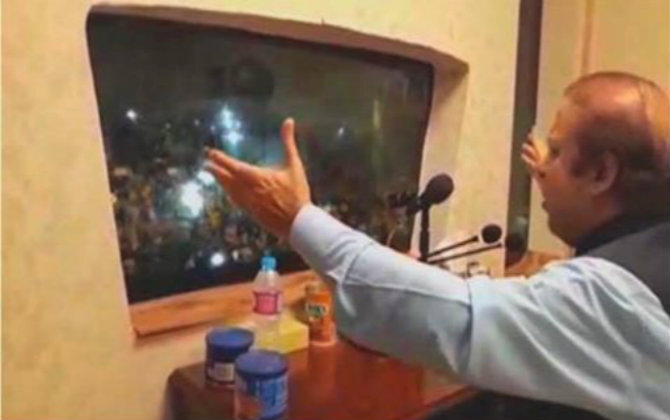 "I have come to you to get this country back on track; to give the people's mandate some respect," he told his supporters, asking “Will you be with me in changing the fate of this country?".

"My agenda will soon be brought to you, and I want the people of Jhelum to be with Nawaz Sharif," he concluded.