One dead after car bomb hits Italian consulate in Cairo 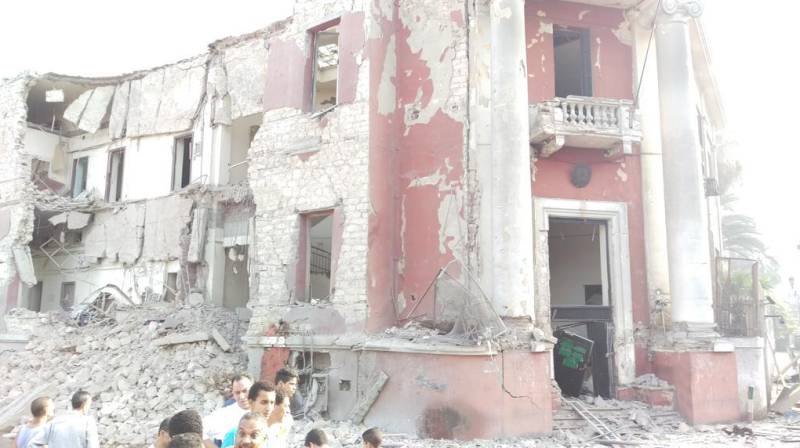 CAIRO (Web Desk) - A large explosion has been gone off near the Italian Consulate in the Egyptian capital, severely damaging the Italian consulate in central Cairo.

No one claimed responsibility for the attack.

Egyptian journalist Omar Elhady published photos on his Twitter account, showing what he said was the damage inflicted on the consulate building in the Galaa street.

Four foreign journalist were being held by the police while trying to report from the scene, said Cairo-based journalist Alessandro Accorsi, who tweeted that he was one of them.

The explosion struck one of the busiest intersections in Cairo, a major artery that connects Ramsis Square to the heart of downtown Cairo.

Even before 7 am on a weekend in the middle of the holy month of Ramazan, the area around the blast would have been crowded with cars, pedestrians and mini-buses.

The embassy was closed and no civilian staff members are among the injured, an embassy official told AP.

Egyptian security forces have been battling Islamic militants, but the fighting has been mostly confined to the Sinai Peninsula.

Militants in Egypt have killed at least 600 police and armed forces personnel in the past two years.

The militants stepped up their attacks after the military overthrew Islamist President Mohammed Morsi in July 2013.

Hundreds of Muslim Brotherhood members, including ousted President Mohammed Morsi, have been sentenced to death by Egypt's courts.