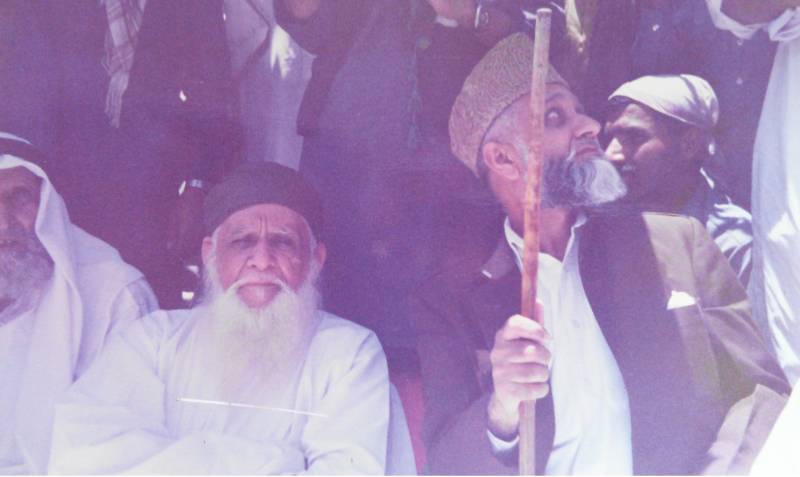 The veteran Kashmiri leader Sardar Abdul Qayyum Khan was not only a captivating personality but also a legendary and eminent politician of Azad Kashmir who rendered his matchless services for upholding the human and political rights of the people of Jammu and Kashmir and also contributed significantly for the development of the liberated territory.

He was born on April 04, 1924, at Ghaziabad, District Bagh Azad Kashmir and received his early education at his native town. He attained Secondary Education from the University of Punjab in Pre-1947 united India.

Later he joined the Engineers Corps of the British Indian Army where he gained valuable experience and knowledge in military and defence affairs. He witnessed the Palestine Operation (the Levant Region) from very close quarters in 1942-46 and had advantage of closely studying the Zionist – Israeli movement right from the very beginning.

In 1946 he resigned from active service and came back to his hometown where he organized, activated and operationalized the Kashmir Freedom Movement in 1946-49.

In recognition of initiation of the Liberation Movement, he was bestowed the popular title of “Mujahid-e-Awal” by the Kashmiri nation.

When the Dogra ruler refused to concede to the aspirations of the people of Jammu and Kashmir Sardar Muhammad Abdul Qayyum Khan, at the age of 22 years, stepped ahead into the active field, organized, galvanized, initiated and finally himself led the mighty Liberation Movement on August 23, 1947 from the historic hilltops of Neela Butt, culminating in the liberation of over 32,000 square miles of area now constituting Azad Jammu and Kashmir and Northern Areas.

In recognition of initiation of the Liberation Movement he was bestowed the popular title of “Mujahid-e-Awal” by the Kashmiri nation. Many prominent, domestic and English historians and writers recognize his role as ‘The First Initiator of Kashmir Freedom Movement’ (Lord Birdwood, Joseph Korbel, Journal Statesman Calcutta).

He raised and commanded 1st AK Battalion which is presently 19-AK Battalion which became 6 Battalion Brigade under his command. This six-battalion Brigade is known in history books as “Qayyum Brigade”. It operated in highly strategic zone between Uri and Poonch. From August 1947 that movement lasted for 18 full months till 1st January 1949. It was halted on the call of the UNO when the ceasefire came into effect; when the volunteer force that was operating in Kashmir was being regularized he was ranked as a Major. But immediately after the ceasefire on the 1st of January he resigned from active service. He then started his political career from the platform of All Jammu and Kashmir Muslim Conference which is the oldest political party in the state.

He also remained the chairman of Presidential Kashmir Committee and was the pioneer of Freedom Movement from 1947 to 1949.

In 1952, he was charged with violation of ceasefire line and was imprisoned for one and a half year.

Later in 1956, he was elected President of AJK State by the General Council of All Jammu and Kashmir Muslim Conference which was then working as the Constitutional Authority.

He was chosen as member and leader of opposition in AJK Assembly from 1996 to 1998.

Sardar Abdul Qayyum Khan was also the author of dozens of books on Freedom Struggle, Political, Mystic, Spiritual and Religious topics, the only contemporary politician of the country who has to his credit vast contribution in politics, economy, defense, religion, Sufism, particularly on Freedom Struggle, both in English and Urdu.

American Biographical Institute declared Mujahid-e-Awwal Sardar Muhammad Abdul Qayyum Khan as the “Man of the Year of 1998” for his outstanding worldwide services for peace.

In recognition of his worldwide efforts for peace he was twice invited to address the Editorial Board of the Wall Street Journal, New York, USA, in 1998.

Various American Universities had offered him Doctorate degree to recognize his services for promoting global peace.

A golden chapter of Kashmir history was closed on July 10, 2015 when Sardar Abdul Qayyum took his last breath after prolonged illness at the age of 91 in Islamabad.