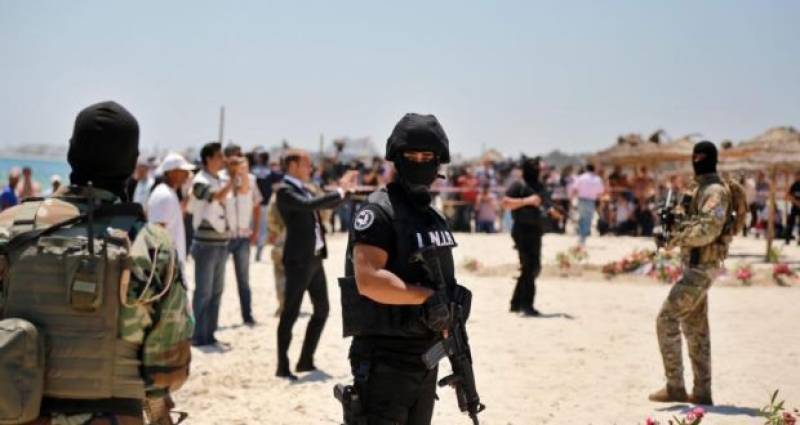 LONDON (Web Desk) - Five Islamic extremists on the verge of carrying out another terrorist attack on holidaymakers in Tunisia were yesterday shot dead.

The five men were killed by Tunisian special forces as thousands of Britons fled the North African country after a security alert.

Security forces tracked down eight ISIS suspects believed to be about to launch another bloodthirsty attack on tourists, with five of the militants killed near the town of El Ktar.

The three others escaped and are still on the run, Mailonline reported.

An intelligence source told the newspaper: 'Tunisian Special Forces acted swiftly as the evacuation got under way to stop them launching another attack.'

Despite the foiled attack just two weeks after 38 tourists, 30 British, were slaughtered in Sousse many of the holidaymakers flown home said they felt the government had overreacted.

Foreign Secretary Philip Hammond was forced to defend the decision, which he said was carefully considered and not a 'knee-jerk reaction'.

Some Britons on their way home said they felt safer in Tunisia than on home soil.

One young couple, with their 21-month-old son, told the Daily Mail: 'We were saying to each other that there is probably more of a chance of a terror attack at Manchester airport than here now.

'There are Army trucks and police everywhere in Sousse. We have felt completely safe.'

Tour operators are being swamped by a scramble for holidays from 300,000 Britons who have lost trips to Tunisia.

People have complained on social media about being kept waiting for hours to get through to helplines.

And most of the holidays left in travel agents’ windows are more expensive than those to Tunisia where packages are relatively cheap.

Thomson-First Choice and Thomas Cook have put on extra holidays to alternative destinations such as Spain, Turkey, the Algarve, Bulgaria and Cyprus.

Britons who make independent plans to go to Tunisia have been warned the Foreign Office advice means their travel insurance will not be valid.