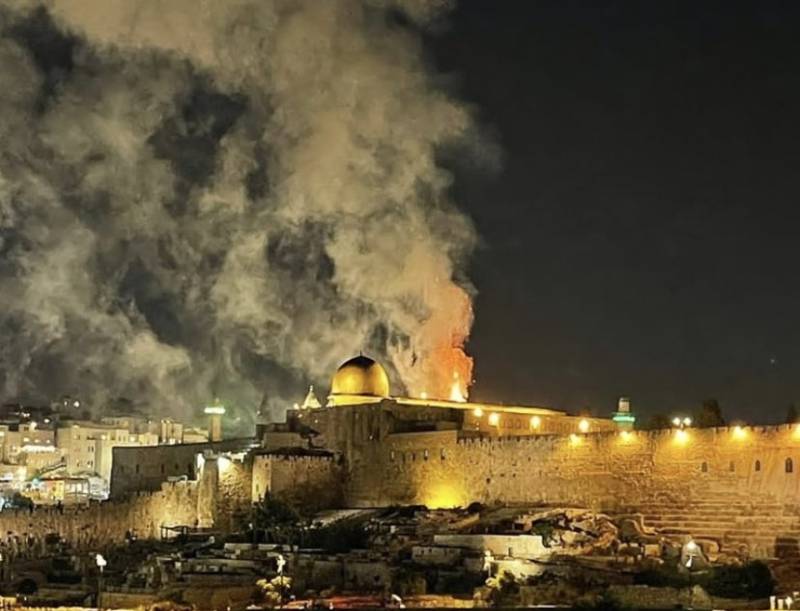 Ashrafi, who is also the chairman of the Pakistan Ulema Council, said during a press conference that the saddening situation in Palestine came under discussion during PM Imran Khan's recent visit to Saudi Arabia.

The announcement comes hours after hundreds of Israeli settlers celebrated the blaze at the Al-Aqsa mosque in Jerusalem. In a viral video, the Israeli settlers gathered at the Western Wall of the mosques were seen dancing on the song as fire erupted in Masjid Al-Aqsa on Monday night.

Painful to see Israelis celebrating attack on holy mosque and innocent muslim worshippers in the month of #Ramadan This is worst form of tyranny & oppression. #المسجد_الأقصى
#PalestinianLivesMatter pic.twitter.com/fgZTEztRh5

The Israeli settlers had marched to the Western Wall of the Old City to mark the ‘Jerusalem Day’ , marking its capture of East Jerusalem in the 1967 Arab-Israeli war, and gathered in the compound of the mosque to watch the fire erupt in Masjid Al-Aqsa.

Among other Muslim nations, Pakistan has also strongly condemned the Israeli violence against Palestinians that unfolded over the past weekend and continued today.

PM Imran has also tasked Minister for Foreign Affairs Shah Mahmood Qureshi to liaison with other countries regarding the situation in Jerusalem, Ashrafi added.

Qureshi, meanwhile, spoke to his Turkish counterpart Mevlut Cavusoglu and assured him that we "fully support Turkey's call to convene meeting of OIC and UN." 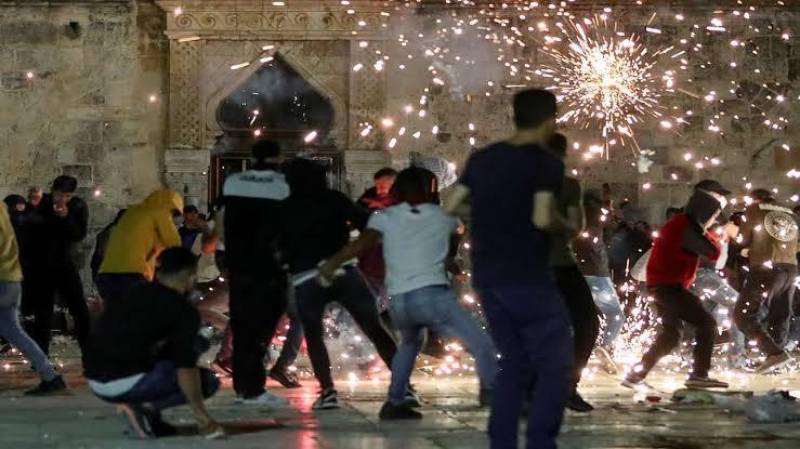 Nine children were among the 26 dead in Gaza on Monday and scores of rockets were launched into Israel, many that were intercepted by missile defences.

The escalation began with confrontations at Al-Aqsa Mosque in the heart of the walled Old City on the compound known to Jews as Temple Mount and to Muslims as the Noble Sanctuary - the most sensitive site in the Israel-Palestinian conflict.

The Palestine Red Crescent Society said more than 300 Palestinians were injured in clashes with Israeli police, who fired rubber bullets, stun grenades and tear gas in the compound.

A young Palestinian boy says farewell to his martyred father who was killed by Israeli occupation forces in his homeland Palestine. https://t.co/THyckcKehW

In a statement, Arab League (AL) Secretary-General Ahmed Aboul-Gheit said the meeting was held to condemn the violations taking place in Jerusalem and the Palestinians' occupied lands in general.

He said the AL also sends a clear message to the world that the escalations in Palestine shall not "continue like this."

"We have witnessed how the Israeli escalation on Monday led to random attacks that signaled the Israeli's desire to expand its influence by force," Aboul-Gheit said.