KARACHI - Lollywood's controversial actress Meera Jee had praised her co-worker Mahira Khan for the first time in a recent tweet.

Meera Jee had criticised the Humsafar  star on several occasions, has changed and expressed her views for the ladies she likes saying, “One of the women I admire Angelina Jolie said that when one has fame, one also has a responsibility to give back to society.”

One of the women I admire Angelina Jolie said that when one has fame,one also has a responsibility to give back to society otherwise that fame is considered vulgar. I applaud #MahiraKhan and #AaminaSheikh for their initiatives working with Afghan cntd .

#AaminaSheikh for their initiatives working with Afghani refugee children and children's education especially for girls. With fame comes responsibility.

Last year, Meera made no secret that she wasn't happy with the praises and endorsement that Mahira receives from the media. "The trend of promoting  Mahira Khan should end, there are other actors in the industry too," the actor had said.

Apart from disclosing her unlikeness for Mahira, Meera Jee had also blamed the Bol star for running a campaign against her. 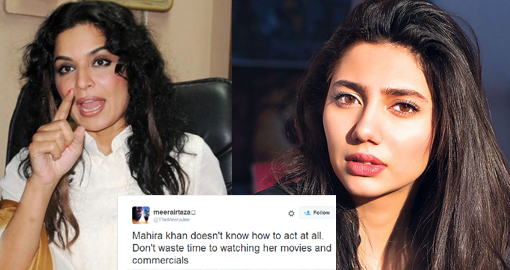 It's good to see stars encouraging each other on their efforts and it also represents a healthy working environment in the showbiz industry. Pakistani showbiz industry is surely reviving and booming. What's your say on this?