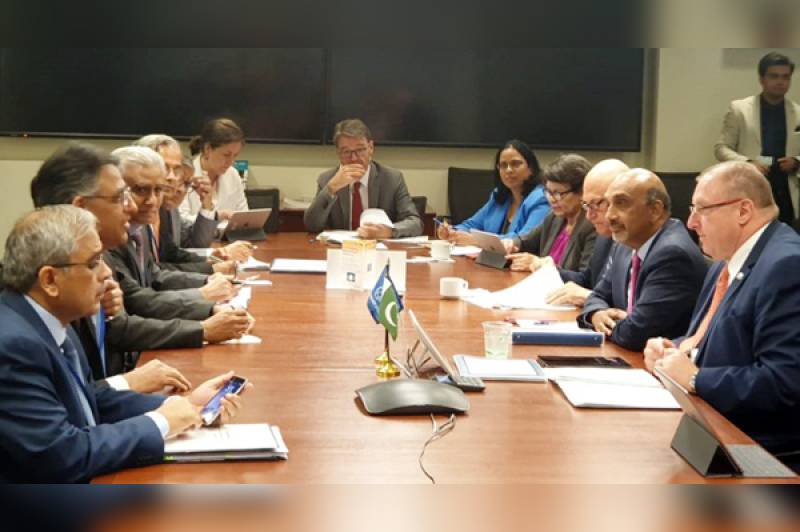 WASHINGTON/ISLAMABAD – Finance Minister Asad Umar and the Pakistani delegation he has been leading, met with representatives of Asian Development Bank (ADB), World Bank representatives and his Saudi Arabia counterpart, to discuss issues related to economy and reforms’ measures taken by the country.

The finance minister and his delegation met with the President Asian Development Bank, Takehiko Nakao and apprised him of the current macroeconomic situation in the country.

The minister and the ADB president discussed continuation of Pakistan’s ongoing engagement with the bank, while Nakao appreciated the reform process in the country and assured continued support of the Asian Development Bank.

They discussed the pipeline projects as well as the sectors where World Bank could further scale up its interventions in Pakistan.

The finance minister also held a meeting with a team of World Bank’s Multilateral Investment Guarantee Agency (MIGA) led by its Chief Operating Officer, Vijay Iyer, and shared views about the privatization policy of the government and the expansion of public private partnership framework in the country.

MIGA team apprised Asad Umar of its current engagements in Pakistan. They informed that MIGA was now looking to expand its portfolio in the country.

On the sidelines, the minister also met with the US Treasury and apprised them about the macroeconomic situation in the country, the reform efforts as well as measures being taken to strengthen the anti-money laundering legal and enforcement framework.

Al-jadaan apprised the minister of increasing growth momentum of Saudi economy and potential employment opportunities for Pakistani construction workers in his country.