400,000 children in DR Congo could die from hunger, says Unicef 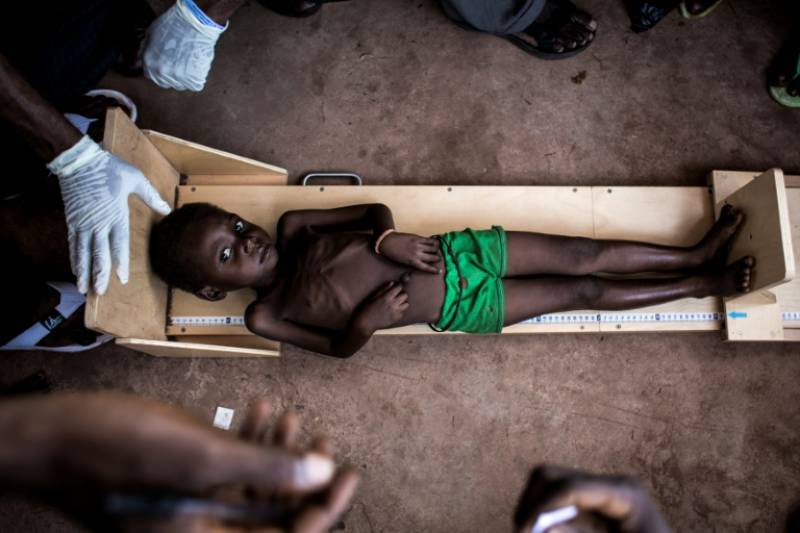 KINSHASA - The United Nations warned Tuesday that more than 400,000 children in Democratic Republic of Congo (DRC) are severely malnourished and could die within months without emergency intervention.

The crisis -- the latest to hit the poverty-stricken, strife-torn central African country -- is unfolding in the vast region of Kasai, the UN’s children fund Unicef said.

An 18-month-long combination of violence, mass displacement and slumping agricultural output are having a devastating impact on the very young, it said.

“At least 400,000 children under five... are suffering from severe acute malnutrition and could die in 2018 if they are not urgently reached with life-saving health and nutrition interventions,” it said bluntly.

The children are the neediest of more than three-quarters of a million who are badly malnourished, even though the security situation in some parts has stabilised and displaced people are starting to return home.

“This nutrition crisis and food insecurity in the Kasai region follows the displacement of thousands of families who have been living for months in very harsh conditions,” said Tajudeen Oyewale, Unicef’s acting representative in the DRC.

“The true scale of the problem is becoming clear as people are returning home in some areas where the security situation has improved and health services have started functioning again.”

The DRC -- a country nearly twice the area of Britain, France and Germany combined -- has a long history of violence, especially in its volatile east.

Until recently, the diamond-rich Kasai region was deemed a relative haven.

The situation changed traumatically in 2016, when a tribal chieftain known as the Kamwina Nsapu, who had rebelled against President Joseph Kabila’s regime in Kinshasa and its local representatives, was killed.

According to UN figures, clashes between local groups and government troops have led to several thousand deaths and around 1.4 million people have fled their homes, leaving fields untended.

The catalogue of alleged violence includes extrajudicial killings, rapes, torture and the use of child soldiers, along with the torching of villages and the systematic destruction of schools, public buildings and clinics.

Security in some parts of Kasai has improved recently, but food shortages will haunt the region right up until next June, because the planting seasons for 2017 have been lost, Unicef said.

“Families have little harvest from their own land and nothing to sell at the markets,” it said.

Unicef, which has been intervening in the Kasai crisis since January, also said the region’s health infrastructure had been devastated.