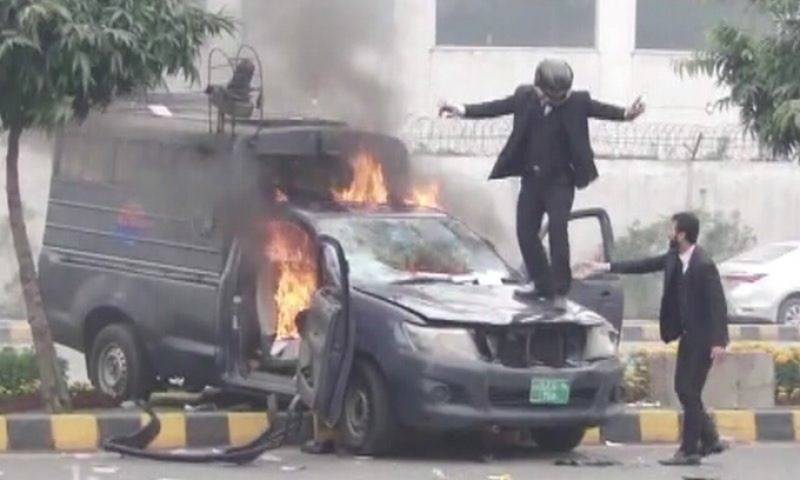 LAHORE - At least 4 patients died and more than 22 doctors were injured on Wednesday (yesterday) as protesting lawyers broke into the emergency ward of the Punjab Institute of Cardiology (PIC) in Lahore.

Violent lawyers stormed into the PIC following alleged torture on a lawyer by doctors a few days ago. According to media reports, the enraged lawyers broke windows of the emergency ward and several vehicles parked nearby the hospital.

The dispute between lawyers and doctors escalated after a video of alleged torture on a lawyer by doctors went viral sparked dispute after which lawyers went out of control. There were reports that policemen have exchanged harsh words with the lawyers.

Patients and families suffered as lawyers broke into the ICU wards of the hospital. “As soon as the protest started, doctors and paramedic staff escaped, leaving the patients unattended,” a patient said.

Following the attack, the Young Consultants Association and the Young Doctors Association announced strikes at all outdoor and indoor emergencies. The doctors claimed that they will continue the strike if the government does not take action against the attack.

Following the inhumane incident by lawyers on the Punjab Institute of Cardiology (PIC), various Pakistani prominent personalities, social media users and stars including Mahira Khan, Mehwish Hayat took to social media to condemn the incident through their tweets:

Today the Punjab government's resolve will be tested and all eyes are on them to see how they tackle this tense situation in the province. More importantly will the culprits get exemplary punishment or not?? Only time will tell. #PICAttack

Extremely sad and tragic what happened at the #PIC today. Government must act swiftly now to deal with all miscreant element and once and for all set a zero tolerance police for law breakers

Even in WAR you do NOT attack HOSPITALS!! These are the law makers, the providers of justice, the educated ones of our country.. scary scary to see. #Lahore #Lawyers

Beyond dismayed to see these images & hear about what is happening back home. What hope is there for our nation if everyone resorts to mob violence to resolve their issues?! You’d think that these lawyers whose job is to uphold the law would know better#Lawyers #PICunderattack pic.twitter.com/COuuuow2AV

#PICAttack - I thought only the jackets were black but they proved that their hearts are black too!!#Lahore #Disgusted #PunishTheseBastards

PM Imran Khan’s nephew @HniaziISF and a bunch of fellow #lawyers caught on camera “peacefully” destroying a police mobile, outside the PIC, which was later set on fire. #PICUnderAttack pic.twitter.com/tSLBaQaLkC

1- Shame on you lawyers. Hospitals are not your playgrounds just because 2-3 black coats were beaten by the docs, u resort to voilence. People are beaten, humiliated, loted and mocked daily in courts and outside of courts by the hands of lawyers. #LawyersAttackPIC#PICAttack

Today , a very sad incident happened at PIC Lahore when #Lawyers attack on this hospital. No one interested to know why they attack but everyone want justice for those who died and injured during this act by lawyer.#RIPHumanity#PICUnderAttack pic.twitter.com/62GL7XPeCu