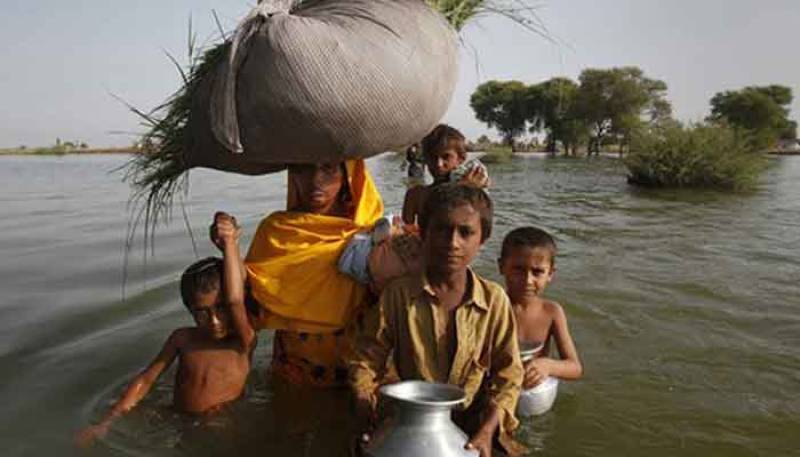 Natural disasters in Pakistan have increased exponentially over the past two decades. Not only the extreme but the slow onset events like droughts and heat waves have also been making frequent occurrences. As a result, vulnerable communities continue to face most of the impact, which pushes them into the poverty trap, affects their health and further diminishes their quality of life. Although the international climate debate is pushing for global climate actions Pakistan will continue to experience the impacts of climate change in the foreseeable future. Therefore, there is an urgent need to protect people who are facing the worst of the impacts.

Pakistan is among the least contributors to greenhouse gas emissions, which cause climate change, but according to Global Climate Risk Index developed by the Germanwatch, it remains one of the top ten countries most affected by the impacts of climate change. Therefore, Pakistan continues to experience economic and human losses worth billions of dollars. The floods of 2010 alone affected 20 million people and caused economic damages of approximately USD$10 billion. Whereas, recent droughts in Balochistan affected over 100,000 families and about 1.7 million livestock. Unfortunately, poorest segments of the society bear most of these damages, who have the least capacity to recover.

Being a vulnerable country, Pakistan needs to adapt to the impacts of climate change. However, for some events such as the ongoing heatwaves in Karachi, and drought situation in Sindh and Balochistan, adaptation is not a feasible option. Farmers can no longer use drought-resistant seeds, livelihood options of vulnerable communities cannot be diversified, urban cooling centres cannot be established and green roofs cannot be made overnight. The question then is to explore what can be done when climate impacts exceed the adaptive capacity of the community and the country.

The concept of Loss and Damage comes into play when communities can no longer adapt to the effects of climate change and the consequences are being experienced in the present. This notion was first pushed in the international climate debate by small islands such as Mauritius, Maldives and Seychelles in the early 1990s, who are most affected by rising sea levels. The idea was to establish a mechanism, which would compensate these countries for dealing with the impacts of climate change, which was largely induced by greenhouse gas emissions of the developed countries. However, it was during UN’s conference of 2013, that Warsaw International Mechanism for Loss and Damage (WIM) was established to address Loss and Damage associated to the impacts of climate change from both extreme weather events and the slow onset ones, particularly in developing countries.

Unfortunately, WIM, despite being created for addressing losses and damages of developing countries, has not been able to leverage any financial support in the past almost six years. Even in the recent UN’s conference on climate change in Germany, Loss and Damage has been a much-debated topic and no concrete way forward has been identified yet. Julie-Anne Richards, Expert on Loss and Damage has been advocating for the need of financing Loss and Damage during the conference in various side events. She has been reiterating that the developed countries have the responsibility towards the developing countries, which are facing negative impacts due to the development trajectory of the Global North. She said, “As an international community, we need to be providing funding to those who are suffering so that they can recover from the damages, particularly women and children.” She also talked about WIM and added, “For the past six years, no additional funds have been approved for Loss and Damage. WIM will be reviewed in the climate change conference of December and there is a need to add polluter pays for developed countries and climate tax for fossil fuel industries. This will ensure funds for Loss and Damage.” Harjeet Singh, Global Climate Change Lead from ActionAid International also talked about the review of WIM in the next climate change conference and said, “We have now an opportunity to make sure that this institution (WIM) is fit for purpose, it responds to realities people are facing on the ground…. The terms of reference need to be robust, comprehensive and forward-looking and that finance remains central.”

Undoubtedly, the international financial support for Loss and Damage will help protect the vulnerable communities of Pakistan, which continue to face the worst of the impacts of climate change. However, the support is still not guaranteed and the efforts to protect these communities cannot be delayed.

Pakistan needs to take immediate internal actions and generate resources in order to safeguard these exposed communities. While a Loss and Damage Programme might not be the most feasible option at this point, improved and efficient Social Safety Nets might work as a short-term solution towards protecting the vulnerable groups. Although there are some Social Safety Nets like Benazir Income Support Programme and Workers Welfare Fund in place they need to be made more inclusive and robust so that vulnerable people facing health and income lost due to climate change are at least covered financially.