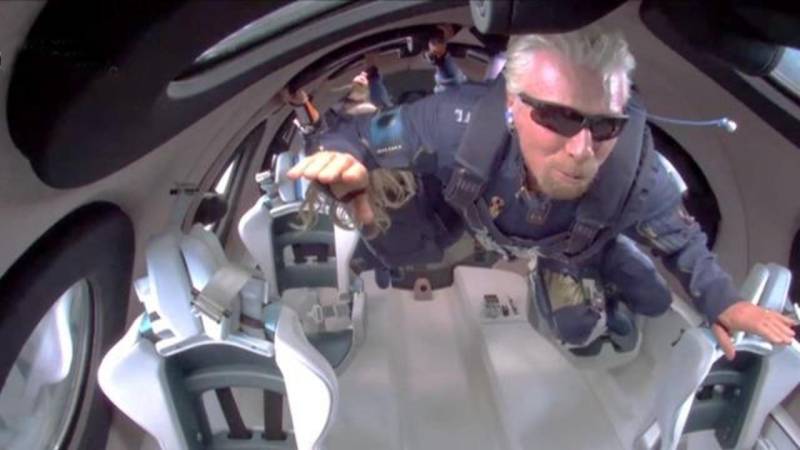 English business magnate and commercial astronaut Richard Branson Sunday successfully reached space which he termed as the ‘experience of a lifetime.'

The 70-year-old has reached space by defeating his rival and richest man in modern history Jeff Bezos - who is all set to reach space about nine days from now. Branson stated the ‘boldest’ adventure of him comes after ‘seventeen years of hard work from his team’.

I was once a child with a dream looking up to the stars. Now I'm an adult in a spaceship looking down to our beautiful Earth. To the next generation of dreamers: if we can do this, just imagine what you can do https://t.co/Wyzj0nOBgX #Unity22 @virgingalactic pic.twitter.com/03EJmKiH8V

He initially announced to make a space plane in the year 2004, with the belief that he could start commercial service in three years but that took an extra decade.

The British billionaire became the first person to reach space in his own spaceship. He also got the title of being the second septuagenarian to depart for space like John Glenn for the first time flew on the shuttle when he was age 77.

Taking it to Twitter, he shared an ‘out of this world’ picture in which he can be seen floating weightlessly in the vessel's cabin. ‘Welcome to the dawn of new space-age,' the caption reads.

Welcome to the dawn of a new space age #Unity22 @virgingalactic pic.twitter.com/Rlim1UGMkx

In the take-off clip, a twin-fuselage aircraft with its space plane attached first departed in the first stage of the flight afterward the space plane detached and fired its engine. The spacecraft returned safely to Earth around over an hour after the takeoff.

Meanwhile, Branson, who hope will usher in an era of lucrative space tourism, said “I've had my notebook with me and I've written down 30 or 40 little things that will make the experience for the next person who goes to space with us that much better.”

Adding that “The only way sometimes you can find these little things is to get in a spaceship and go to space and experience it for yourself.”

Furthermore, Tesla owner Elon Musk also arrived in New Mexico to witness the flight, wishing Branson via Twitter, ‘Godspeed’, he wrote. However, Musk himself has not committed to going into space anytime soon.

Following the Astro-tourism hype, around 600 individuals have already paid deposits for tickets that will cost them up to $250,000.

Jeff Bezos, the founder of Amazon, Monday announced that he will fly to space with his brother on his spacy ...