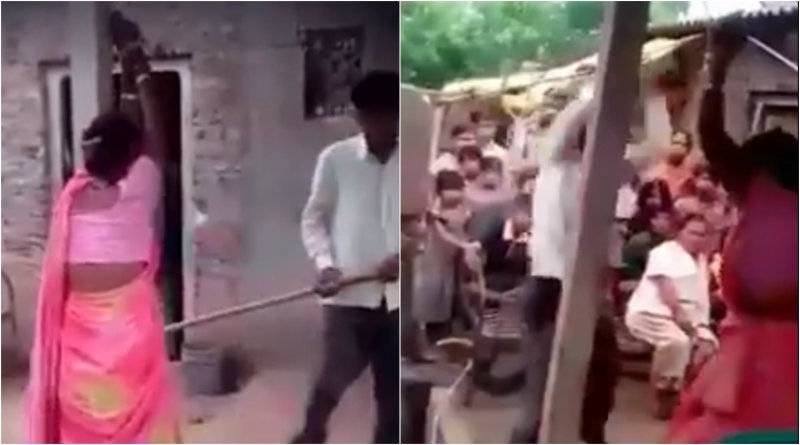 BIHAR, UP (Web Desk) - A video of a man beating his wife and her alleged lover in India was shared on Facebook, sparking a debate on whether it is fair to use the same level of violence use on men for women as well.

The video was shared recently by human rights activist Kundan Srivastava on his Facebook page, and showed a man cruelly beating his wife and another man - both tied up with rope - as neighbors stood by watching.

Surprisingly, there is a section of the populace that is actually supporting the treatment meted out by the man.

Srivastava who shared the video on his FB page with the following message: “The Video was sent to me by one of the followers. I don’t have any authentic information yet about the incident. But, after seeing the Video I do believe it can be a Love Affair.

A Man brutally beating his wife and her Lover in front of the entire Villagers. You can see in the video that both Man & Woman have been tied to the pole and are beaten severely. The woman’s voice shows that she may belong to Bihar, UP & Jharkhand

I condemn the incident and urge the people of India, if you have any authentic information ..Inbox me please! ?#?HeightOfCruelty?

PS: I’m against the Violence, Physical Abuse and the Crime!”

Interestingly, the video has sparked an online debate among viewers. While some have condemned the incident, others have taken a sympathetic view and even supported the man’s violent reaction, saying: “When a man do mistake u punish very hardly . Y can’t we punish women equally?”

Though it was heartening to see that members of the social media community stood for gender equality, the attitude towards use of physical violence as a means to exercise that sense of equality is justifiably worrisome.

Srivastava told the Indian Express that his team was trying to find out more details on the incident, but has been unable to do so thus far, as it was shared by a follower.

From the voices, the engineer has speculated that the incident may have taken place in Bihar, UP or Jharkhand, he said there were some who believed it may have been in Maharashtra instead.