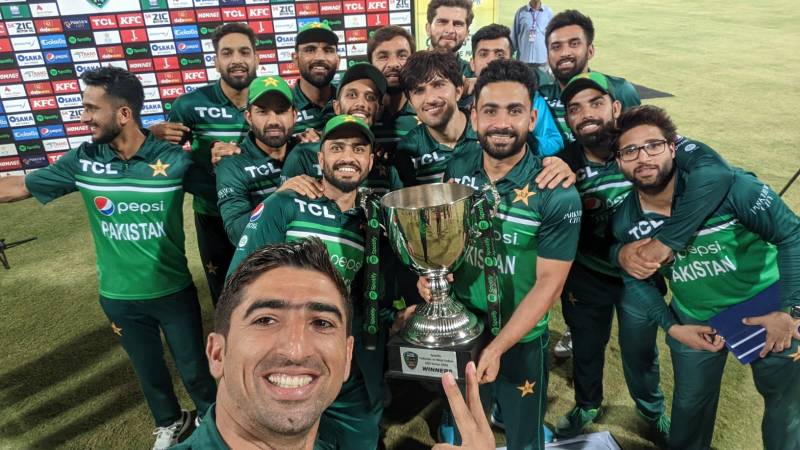 MULTAN – Pakistan on Sunday clean sweeped the ODI series against West Indies 3-0 after a 53 run-victory (DLS method) in the third ODI in Multan.

The visitors were dismissed for 216 chasing a target of 270.

Pooran turned his arm over only for the second time in his 43-match ODI career to take 4-48 after Pakistan slumped from 85 without loss to 117-5, having won the toss and opted to bat.

The innings seemed to have fallen apart with Babar Azam's rare failure for one but Shadab wielded his bat to the best effect.

Between a 60-minute dust storm that curtailed the match to 48 overs-a-side, Shadab hit three sixes and four boundaries off 78 balls before being bowled in the last over.

Pooran chipped in with the wickets of Zaman, Haq, Mohammad Rizwan (11) and Mohammad Haris (nought) off just 25 balls, having never taken more than one wicket in his first class career.

Earlier, a sand storm stopped the third and the final ODI between Pakistan vs West Indies at Multan Cricket Stadium.

All players left the ground after a dust storm engulfed the stadium. Men in Green were batting at 155-5 after 33 overs when the game was stopped.

Green Shirts won the toss and elected to bat first against the West Indies in the third and last one-day international on Sunday.

Babar-led squad, who have an unbeatable 2-0 lead in the series, handed an ODI debut to young pacer Shahnawaz Dahani, who replaced Haris Rauf.

Visiting side also made three changes, as they left out Alzarri Joseph, Anderson Phillip and Brandon King to bring in Keacy Carty, Jayden Seales and Keemo Paul.

With a 120-run victory in the second match on Friday, the Green Shirts have taken an unassailable 2-0 lead in the series.

Chasing 276, the visitors were bundled out for 155 within 33 overs in Multan as Nawaz excelled with his spin bowling and finished with career-best ODI figures of 4-19. Mohammad Wasim also chipped in, taking 3-34 on his comeback.

Earlier, Pakistan captain Babar Azam (77) and opener Imam-ul-Haq (72) formed a formidable partnership of 120 for the second wicket to hand the hosts a par score after they opted to bat.