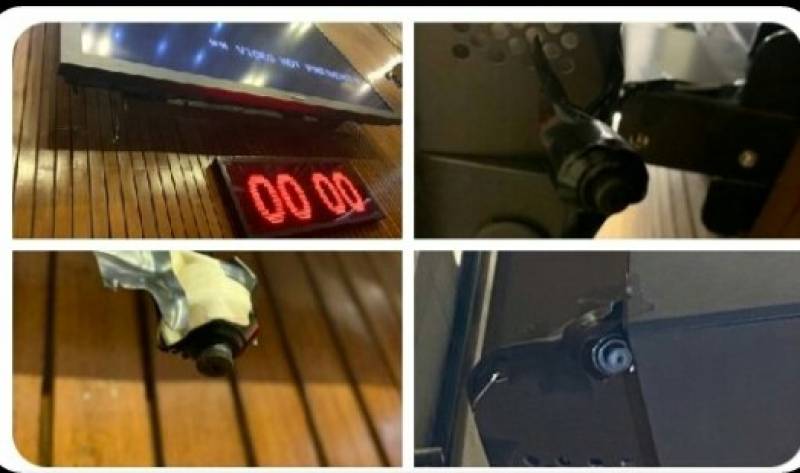 ISLAMABAD – Pakistani Senators and the leaders from both government and opposition leaders were surprised to discover “hidden” cameras in the polling booth of voting for Senate chairman and deputy chairman seats on Friday.

As the proceedings commenced, PPP’s Raza Rabbai made this “disturbing announcement” that secret cameras had been installed at the polling booth.

“It is clear violation of Article 226 of the Constitution,” said Raza Rabbani followed by the fellows’ slogans of “shame, shame”.

Following the protest of the opposition leaders, the presiding officer issued directives for changing the polling booth. “A new polling booth should be set up instead of the present one,” said the Presiding Officer.

Mustafa Nawaz Khokhar who is the PPP Senator had pointed out earlier that PML-N Senator Musadiq Malik had found “secret cameras” in the polling booth.

Myself and Dr Musadik found spy cameras right over the polling booth!!!! pic.twitter.com/aqRGFRYFbq

The senators had shared apparent evidence on Twitter hours before the Senate was set to elect its new chairman and deputy chairman.

"What a freaking joke. The senate polling booth has secret /hidden cameras installed, " tweeted Dr Musadik Malik along with the pictures of cameras.

What a freaking joke
The senate polling booth has secret /hidden cameras installed
SO MUCH FOR DEMOCRACY pic.twitter.com/S7OapMhZtn

The PML-N senator also claimed that there was a "hidden device" in the polling booth.

The two leaders, after posting the pictures on Twitter, also held a press conference outside Parliament House once the Senate session started.

Dr Malik said that both PML-N and PPP had directed them to check the polling booth before the election of the Senate chairman.

"Mustafa Nawaz Khokhar and I went to the polling station on direction of our parties to check the polling booth," said Dr Malik.

Another hidden device found in the polling booth. Bravo pic.twitter.com/ZGAO04RBMb

The PML-N senator said that when they arrived at the booth, there were "hidden cameras" right above the polling booth.

"Both were pointing exactly towards the person voting and the second hidden camera was focused on the ballot paper," said Dr Malik.

"Who is it who put up cameras in the booth," asked the PML-N senator. He also claimed that there was a lamp inside the polling booth with "holes" in it, adding that there were many microphones and cameras in it.

The opposition demanded that an investigation be carried out into who was "in control of the Senate".

Reacting to the Opposition's allegations, the ruling PTI has alleged that the cameras were deployed by the Opposition leaders themselves only "to stage a drama" later on.

Federal Minister for Information Shibli Faraz addressed a press conference flanked by PTI senator Faisal Javed in Islamabad to speak on the matter.

The information minister noted that the opposition has given an impression that the cameras were deployed by the government. "We will make sure that this incident is thoroughly investigated. We all know what people were employed inside the building during their [the PPP's] tenure. We will expose who the agents and proxies of PPP and PML-N are," he said.

"They are the ones who talk about tactics to waste votes. Our main objective is transparency and that is what PM Imran Khan has been struggling for for so long," the minister added.

Meanwhile, Faisal Javed said the government has offered the option for open balloting but Opposition leaders have always declined the suggestion.

"We challenge them on open balloting but they are not ready for it. All they want is an NRO [amnesty deal] from Imran Khan."

Referring to PML-N Senator Dr Musadik Malik and PPP Senator Mustafa Nawaz as "James Bond 007", the PTI leader claimed that everything was pre-planned by the Opposition.

"They are the ones yearning for secret ballot, [devious] tactics and conspiracies," he added.

Meanwhile, Minister for Science and Technology Fawad Chaudhry responded to Khokhar's tweet, stating that it looked "more like a CCTV cable" and that "spy cameras are far more sophisticated".

The Senate secretary should look into this claim, he said.

This is one example of Spy Camera the camera can be fitted in a head of nail even,detection of such cameras is impossible, in all likelihood CCTV Camera cable is misunderstood as spy camera pic.twitter.com/KPu8a2RCpA

In another tweet, he shared an "example" of a spy camera. "The camera can be fitted in the head of a nail. The detection of such cameras is impossible. In all likelihood, the CCTV camera cable has been misunderstood as a spy camera," he theorised.

During the morning session, Senator Syed Muzaffar Hussain Shah administered the oath to the 48 members. After taking the oath, the Senators signed the roll of members.

ISLAMABAD – All 48 newly elected members of the Parliament’s upper house took oath as Senators at the ...