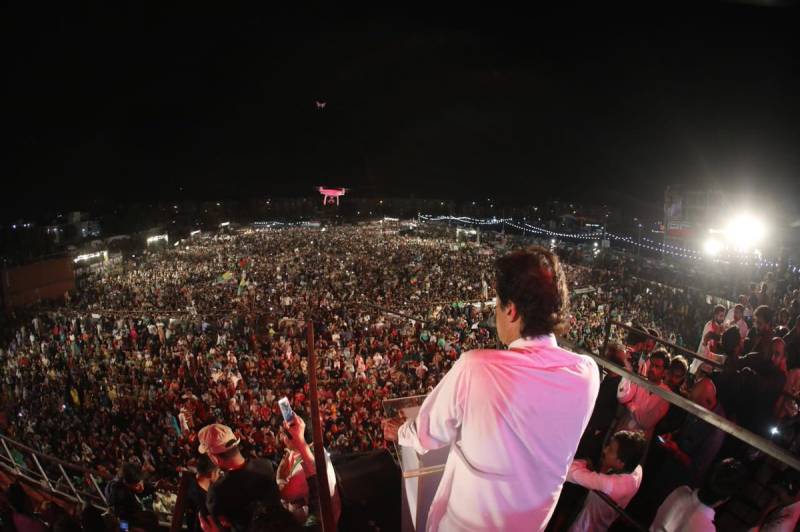 KARACHI - Pakistan Tehreek-e-Insaf chairman Imran Khan on Saturday presented his plans to transform Sindh capital into a great city with his 10-point agenda.

Khan, who has emerged as the top contender for next prime minister, was addressing a PTI rally in Pakistan’s biggest city where he called Karachites “the most politically mature”.

"Karachi is the financial hub of Pakistan. Karachi's people [are always] the first to unite against the country's issues," the PTI chief said, as he called on the public to shun differences and come together for the common good.

Taking on the ruling Pakistan Muslim League-Nawaz (PML-N), Khan said his priority would be to end corruption from the country after winning upcoming polls.

Two weeks after unveiling his 11-point national programme to turn the country into ‘Naya Pakistan’, the PTI chief laid out a 10-point plan explaining how he would rid Karachi of its biggest problems if he comes into power in the upcoming general elections.

Khan started off with the biggest problem of Karachi - water shortage – saying that the city generating 70 per cent revenue of the country did not have enough water to meet its needs.

He linked this issue with a lack of authority given to the city's mayor — something he said he would change by holding mayoral elections.

"We will change the administrative system here and get this city a directly elected mayor of the city," he said.

“We will bring someone who knows administration. He will have a specialist team and we will empower him,” he added and announced contesting elections from Karachi.

The PTI chairman also promised to change the system of government schools for the poor children and make education accessible and affordable for all. "Seventy per cent students go to government schools, which are in a state of disrepair," he said.

"In Khyber Pakhtunkhwa, for the first time, 150,000 kids have transferred from public to private schools. We will improve government schools so the poor man’s kids can get educated."

"We will also establish international standard universities here (in Karachi)," he added.