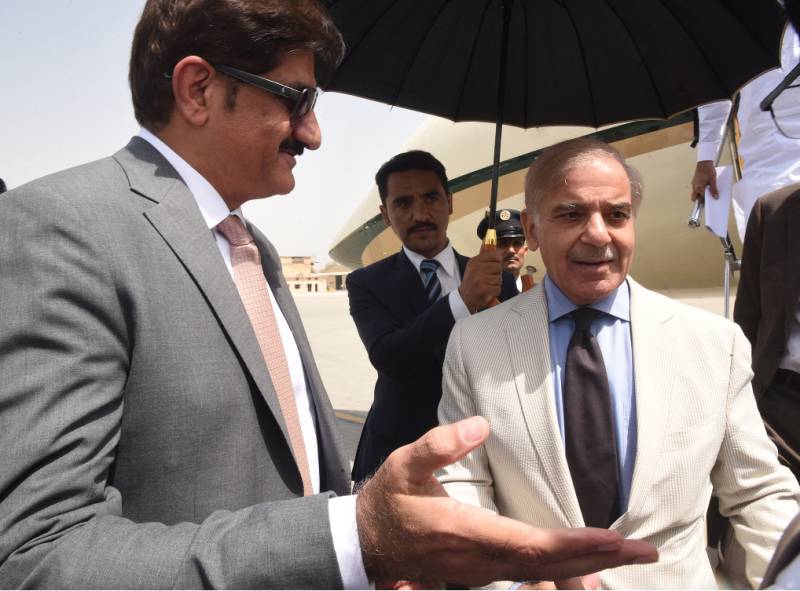 KARACHI – Prime Minister Shehbaz Sharif has stressed the timely completion of key development projects in the country’s financial capital as he called on Sindh Chief Minister Murad Ali Shah and key coalition partner during his first visit to the port city.

Sindh provincial cabinet was present on the occasion to greet the newly appointed premier.

During his meeting with Sindh CM, Sharif assured to include Karachi Circular Railway (KCR) in China-Pakistan Economic Corridor (CPEC)-related projects and also announced the establishment of a new university.

He also stressed on timely completion of development projects. Shah also assured PM to work closely with the federal government for the welfare of the residents.

CM Sindh Murad Ali Shah also briefed the premier about the problems of Sindh province with a focus on Karachi.

Muttahida leaders will reportedly not join the federal cabinet as PM is scrambling to piece together an administration days after being elected as the premier. MQM-P convener Khalid Maqbool Siddiqui said only the commitments are significant and need to be fulfilled.

Earlier in the day, Sharif visited the mausoleum of Quaid-e-Azam Muhammad Ali Jinnah, where he paid his respects and offered Fateha.

LIVE #APPNews : Prime Minister Mian Muhammad Shehbaz Sharif along with the leaders of allied parties pays his respects at the mausoleum of Quaid-e-Azam #Karachi @CMShehbaz https://t.co/jqwivK7JBj

A report of the state broadcaster said Sharif laid a floral wreath at the Quaid’s mausoleum and offered Fatiha as he visited the southeastern region first time after becoming Prime Minister.

PM arrived on a day-long visit to Karachi earlier in the day and chaired, among other meetings, a consultative meeting on the development projects.