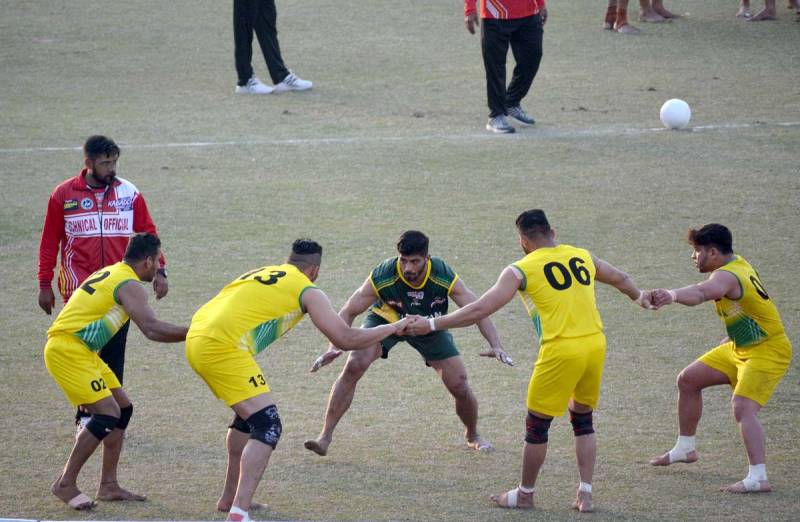 LAHORE – As expected, Pakistan comparatively outplayed inexperienced Australian kabaddi team by 62-25 in a Pool ‘B’ match and booked a place in the semifinal on the 5th day of Kabaddi World Cup 2020 at Iqbal Stadium, Faisalabad on Thursday.

According to the information made available here, in Pool ‘A’, India grabbed the top spot by defeating Iran by 50-39 and confirmed their place in the last four stages of Kabaddi World Cup. Iran and Australia are the other two teams who reached the semifinals from Pool A and B, respectively.

Pakistan chose to raid first after winning the toss against Australia. Pakistan raiders skipper Irfan Mana, Lala Obaidullah, Kaleemullah Jatt, Bilal Mohsin Dhillon were in best form and scored valuable points against Australia. On the other hand, Pakistan stoppers Musharraf Janjua, Shani Basra and Zafar Iqbal and their teammates exhibited similar form during the comfortable victory of their team.

Earlier, after winning the toss, defending champions India maintained their supremacy against strong Iran team winning a tense clash by 50-39. Players from both the sides exhibited top class kabaddi during the tough contest. In the first half, Iranian players managed to carry their points parallel to India at 26-23, however, India widened the points gap in the second half and ultimately won the mach by 50-39.

Players of both the teams competed without shirts in the second half following a controversy. The jury ordered the players to play match without shirts on the request of Iranian players.

Though Sierra Leone won the toss against Germany, they lost their match badly by 43-14. Strong German team dominated their opponents in both raiding and stopping departments throughout the match. Germany’s Manpreet Singh and Kuldeep Singh were the best raider and best stopper of this one-sided match.

Two more Kabaddi World Cup matches will be played at Zahoor Elahi Stadium in Gujrat on Feb 14, 2020. Pakistan will face Azerbaijan in the first match at 2.30pm while the second match will be played between India and England at 3.45pm on the 6th day activity of grand kabaddi event.