Locals say they are Australians or Germans on a world tour, but nobody knows when and where they will be heading now 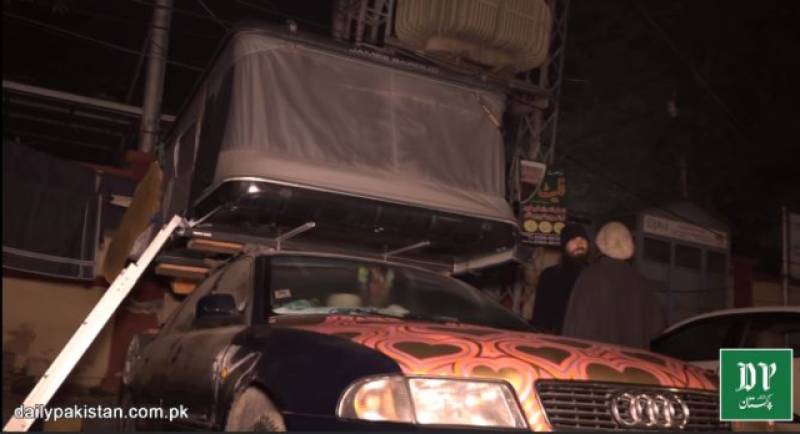 LAHORE – A foreign couple, who appear to be Australian or German but don’t like to talk to anyone with a camera, have been squatting outside the Customs House in Punjab capital city for the past six months without permission.

Nobody has bothered to move them, probably because of their ethnicity.

According to the locals, they had come to Lahore six months earlier and had stayed for a few days at an inn near Anarkali Bazaar. However, when they ran out of cash, the owner told them to leave. That is when they started living in their car, parked near the Metro Bus terminal, with a tent set up on the car’s roof.

They have a puppy to play with and a small cylinder with a burner to cook food. The couple hang their clothes to dry on a nearby main electricity line.

According to locals, the couple had left home to travel the world on their car and were supposed to cross the Wagha border into India, but did not get permission due to the ongoing Covid-19 pandemic, which is wreaking havoc in the neighbouring country. Since then, they have been practically living at the same location where they live and order food deliveries in their car.

Daily Pakistan correspondent Yasir Shami tried to talk to them, but they refused and pushed the camera away.

Locals told DP that the couple like to make soup on Sundays that they distribute for free and once had distributed rice they had cooked to the workers in the area. Shopkeepers also helped them when their car got submerged in rainwater a couple of weeks ago after which they had moved their vehicle, but came back the next day.

They really seem to like living in Lahore, but authorities have been asked to provide them with assistance if they truly are marooned here due to lack of funds or any other reason that is preventing them from completing their world tour.