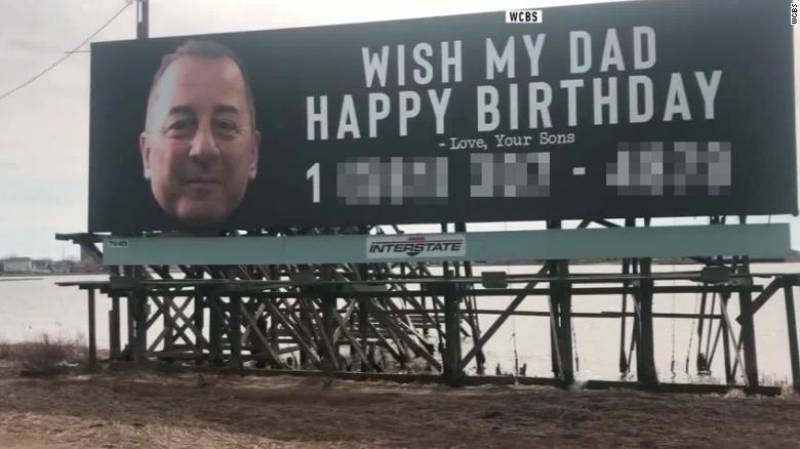 NEW JERSEY -Many parents expect a call from their kids on their birthday, but one New Jersey dad is getting thousands of birthday wishes thanks to a prank from his sons.

Chris Ferry’s two sons did something unexpected on his 62nd birthday. One of his sons thought of putting their dad's number on a billboard. "What if we put his big head on a billboard and said, 'Wish my dad happy birthday,'" Ferry's son, also named Chris, though.

Ferry immediately called and told his brother Michael who "started dying laughing" at the idea. The brothers hesitated for a few days, fearing their dad would get mad at them sharing his personal number on a billboard. Eventually, they decided they had to "go big or go home."

The billboard, which includes their father's photo and phone number, went up last Wednesday morning and can be seen on the way to the Atlantic City casinos.

The elder Chris Ferry told the  US publication that he has been receiving texts from strange numbers within minutes of the giant sign going up. The volume of calls and texts increased dramatically when his son shared a photo of the billboard on Facebook.

“I think I’ve had 15,000 calls, texts and Facebook hits in the last three days,” Ferry told the station. “I’ve received texts from all over the world, as far as the Philippines, Kenya, Luxembourg.”

Ferry’s actual birthday is March 16, but the billboard will stay up until April 6, as reported by leading US publication 'CNN'.

The stunt was a continuation of a childhood prank in which the boys would tell waiters and waitresses that it was their father's birthday, the younger Chris Ferry said. He doesn't quite know how he's going to top this gift next year.

"Maybe get a bigger billboard," he said with a laugh.

Did this incident make you laugh hard like us? Let us know too.