Afghanistan appreciates Pakistan’s support for peace and stability in region 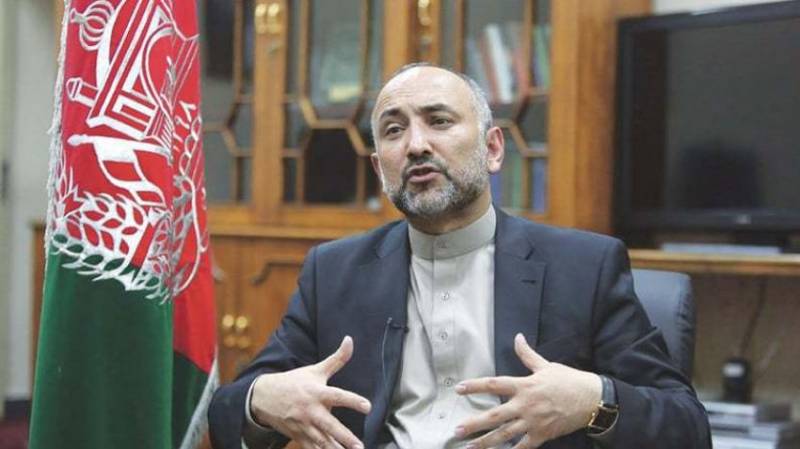 In a tweet Sunday, Atmar fully shared view of Foreign Minister Shah Mahmood Qureshi and the Foreign Office of Pakistan that a peaceful and stable Afghanistan will bring new opportunities for progress and prosperity of not only Afghanistan but also the region.

I fully share the view of @SMQureshiPTI & @ForeignOfficePk that a peaceful and stable Afghanistan will bring new opportunities for the progress and prosperity of not only Afghanistan but also the region. We appreciate Pakistan’s support for a lasting peace.

Earlier today, Pakistani premier reiterated the country’s resolve to continue its full support and solidarity with Afghan people, as they march forward in their consequential journey for peace and development.

Prime Minister Imran Khan said successful culmination of an Afghan-led and Afghan-owned peace and reconciliation process is indispensable for Afghanistan and regional peace.

PM Imran Khan has been an advocate for Peaceful settlement in Afghanistan for the longest time. Today, the world and...

The Afghan government, and allies including the US, called for a ceasefire in the Qatari capital Doha over on Saturday.

At the ceremony, Pakistan warned the international community against the role of spoilers as long-time rivals began peace talks in Qatar for a ‘lasting peace’ in the war-torn country.

Addressing the opening session through video link, Foreign Minister Shah Mahmood Qureshi termed the commencement of peace talks a global recognition of Pakistan’s stance of no-military solution to Afghan dispute rather a political solution being only a way forward.

“The Afghans alone must be the masters of their destiny without outside influence or interference.

The spoilers from within and from without will pose formidable challenges. Constant vigilance will be required to guard against their machinations,” Qureshi said.

The US-backed negotiations come six months later than planned owing to disagreements over a controversial prisoner swap agreed in February.

Under the terms of that force withdrawal deal struck between the US and the Taliban, 5,000 Taliban prisoners have already been released in exchange for 1,000 government forces.