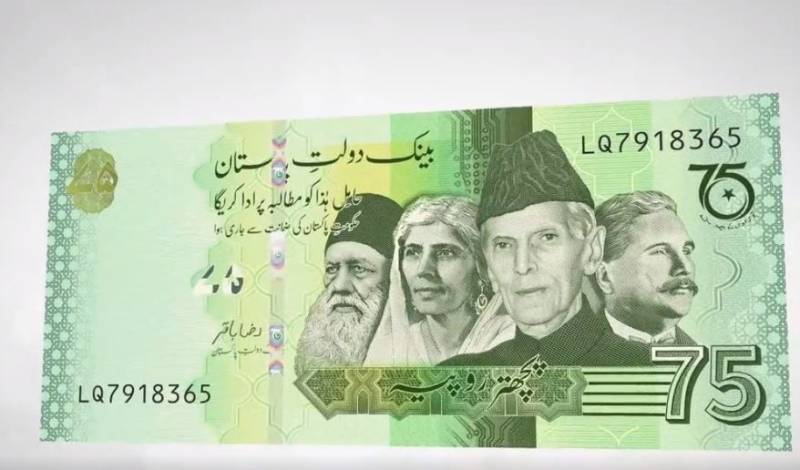 KARACHI – The State Bank of Pakistan has released a commemorative banknote of Rs75 to mark the 75th anniversary of Pakistan.

In a recent post on Twitter, the central bank said the banknote is signed by former SBP governor Dr Raza Baqir and it would be available for public issuance on September 30, 2022. “Green and white colour were chosen for the banknote as they represent Pakistan,” SBP added.

1/2 #SBP unveils the design of Rs.75 commemorative banknote being issued on 75th anniversary of the country’s independence. The note will be available for public issuance from 30th September 2022.
For details: https://t.co/ZvCNGKxSjV pic.twitter.com/qweDbs28g7

The rear side of the currency features Deodar trees and markhor, the national animal of Pakistan. The commemorative note is also equipped with security features as with the other currency notes.

The federal government approved the Rs75 note in accordance with the SBP Act 1956, following the recommendations of the central bank's board.

The vignette on the back side of the banknote is inspired by the artwork banknote done by young Pakistani artist Sara Khan, the SBP wrote on its official website.

SBP maintained that the color scheme, portraits, and images along with the public service message were conceived by the internal banknote committee at the SBP and integrated into a final note design by the banknote designers at De La Rue, United Kingdom.

Furthermore, the portraits and numbers on the note have raised printing, allowing identification of the banknote by the visually impaired people.