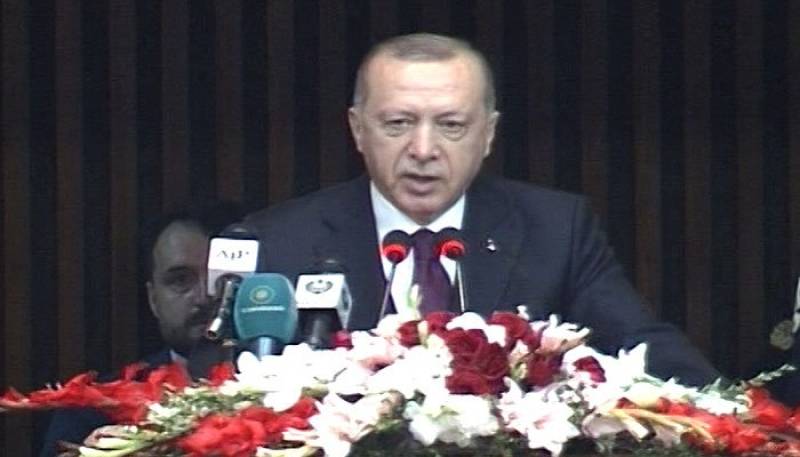 ISLAMABAD - Turkish President Recep Tayyip Erdogan has said that he was thankful and happy to have had the opportunity to address the joint session of the parliament in Pakistan and assured to fully back the country in the Financial Action Task Force (FATF).

Addressing joint sitting of the Parliament in Islamabad, the Turkish President thanked the Pakistani people and leadership over the warm welcome he was accorded upon arrival and said that Turkey will continue to support Pakistan on important matters as in the past.

In his address, Recep Tayyip Erdogan said “While in Pakistan, I feel like I am at home,” adding that "Today, Pakistan and Turkey's relations are admirable for others. During difficult times, Pakistan has supported Turkey.,"

He said that Pak-Turkey friendship is based on love and respect. “Pakistan’s pain is our pain,” Turkish president stated further.

Tayyip Erdogan also hailed Pakistan's efforts in the war on terrorism and said that Pakistan was the most affected by this menace.

He said we are fully cognizant of the problems faced by Pakistan and we will continue to extend cooperation to it to cope with them.

Speaking about the issue of occupied Kashmir, the Turkish president said that Indian-occupied Kashmir meant to Turkey exactly what it had meant to Pakistan over the years. "The relationship between Pakistan and Turkey will continue in the future like it has in the past," he added.

Prime Minster Imran Khan greeted the Turkish president upon his arrival at the parliament house to address the joint session.

Chairman Senate Sadiq Sanjrani, Speaker of the National Assembly Asad Qaiser, Governor Sindh Imran Ismail, and other top officials, including the service chiefs of the armed forces were also present on the occasion.

On Thursday, Turkish President Recep Tayyip Erdogan arrived in Islamabad on a two-day visit to Pakistan.