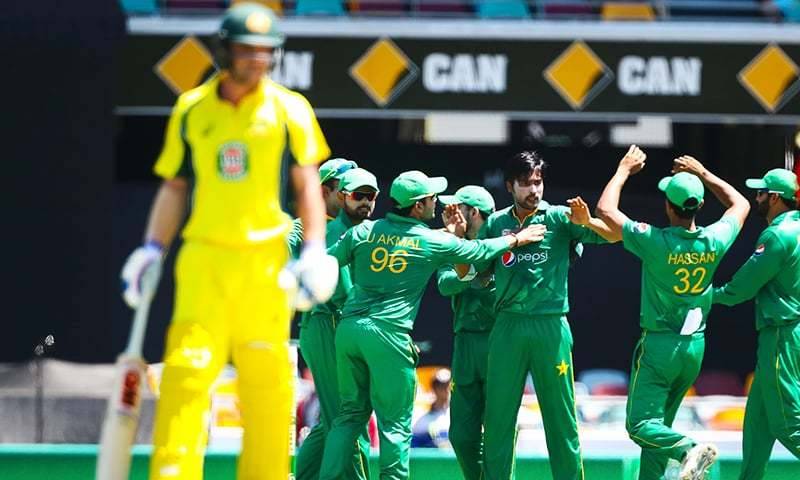 BRISBANE – Pakistan won the second One-Day International of the five-match series by 6 wickets against Australia here on Sunday, leveling the series at 1-1.

The Pakistani side managed to score 221 runs in 47.4 overs with skipper Hafeez contributing a crucial 72 to the total. He was declared 'Man of the Match'

Pakistan while chasing a moderately tough target managed to make a total 68 runs before it lost first wicket of Sharjeel Khan (29).

Afterwards, Babar Azam helped skipper Hafeez keep the score card ticking but he was sent to pavilion by Mitchell Starc after scoring 34 runs.

Asad Shafiq was unfortunate to get out on mere 13 runs but the next one in line, Shoaib Malik played decisive role in steering Pakistan’s team as he scored 42 not out.

On the other hand, Mitchell Starc and James Faulkner took two wickets each.

Another interesting aspect is the fact that Pakistan won the 1992 World Cup at the same ground.

Earlier, Australia set a total target of 221 runs for Pakistan to bag victory in the second One-Day International.

Australian team was bowled out in 49th over as they managed to score 220 runs with a run rate of 4.55.

Australian side faced a tough time due to Pakistan's pace attack and only Steven Smith managed to cross 50 runs as he was sent to pavilion by Imad Wasim on 60.

The phenomenal spell of Muhammad Amir helped Pakistan restrict Aussies to 220 as he took 3 for 47 while Junaid and Imad helped him by taking 2 wickets each.

Australia had won the toss and elected to bat first against Pakistan in the second One Day International.

The tourists are facing back-to-back setbacks as Sarfraz Ahmed, the wicketkeeper-batsman and vice-captain, has flown back home after his mother was admitted to the intensive care unit of a private hospital in Karachi with a serious illness.

Mohammad Hafeez, who has returned to the Pakistan ODI set-up after his inclusion was requested by captain Azhar Ali and coach Mickey Arthur, also joined the team.

Pakistan, who were whitewashed in the three-match Test series against Australia, are to play their third ODI on January 19.

Australia made two changes in their playing squad as Usman Khawaja and Josh Hazlewood have been included whereas Pakistan made three changes as Asad Shafiq, Junaid Khan and Shoaib Malik would be showing their skills today. The injured Azhar Ali would not be playing the second match and Hafeez would be leading the green shirts.

With today's victory, the series is now level at 1-1.

Note: Now with Daily Pakistan, you can watch Pakistan vs Australia ODI series Live Streaming. In addition to watching the match live on stream, we also have a real-time Live Score Widget, in addition to other facilities like Time, Squads, TV Listing etc. No other newspaper covers Pakistan Cricket like we do!

Muhammad Hafeez leads a Pakistan one-day team that has lost its last six matches against Australia.