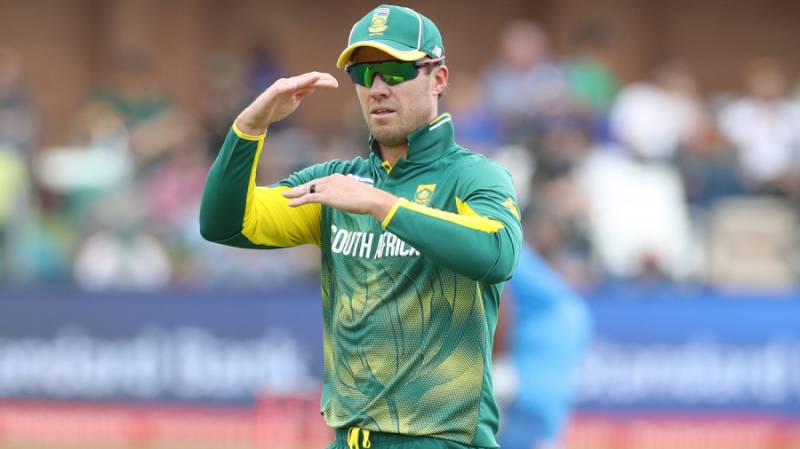 LAHORE - With one month to go for the start of the HBL Pakistan Super League 2019, one of the world's most popular and competitive cricket leagues got another shot in the arm when charismatic and flamboyant former South Africa captain AB de Villiers confirmed that he will feature in Lahore Qalandars' back-to-back matches at the iconic Gaddafi Stadium in Lahore in March.

Lahore Qalandars, who are hoping to be fourth time lucky in their quest for glory, will take on defending champions Islamabad United on 9 March, while on the following day, they will face Multan Sultans,said a spokesman of the Pakistan Cricket Board here.

AB de Villiers will also be in action on the opening day of the tournament on February 14 in Dubai, when the Qalandars meet Islamabad United. The 32-day and 34-match tournament will culminate with the final at Karachi's historic National Stadium on March 17.

"I am delighted to confirm that I will represent Lahore Qalandars in front of our home crowds on 9 and 10 March, during the HBL PSL 2019," de Villiers, one of the most followed and admired cricketers of the modern era, announced on Monday.

"I look forward to revisiting the Gaddafi Stadium and aim to play my part in helping Lahore Qalandars achieve something they have been aspiring for since the inception of this tournament in 2016," he added.

De Villiers's previous visit to Lahore was in 2007. In the drawn Test that October, he had scored 45 and eight not out, but returned later in the same month to score 103 not out, 35 and 17 in the first, second and fifth ODIs, respectively.

"I am fully aware that cricket is like a second religion in Pakistan. I still remember the support and appreciation we received in 2007. Furthermore, I feel I have a role to play in helping international cricket return to Pakistan. These have been some of the motivating factors for me to return to Lahore," said de Villiers.

Later that year, Sri Lanka visited Lahore for a T20I, while the Windies played three T20Is in Karachi in April 2018. In May 2015, Zimbabwe had toured Lahore for five international matches.

After the entire 2016 inaugural event was played offshore, HBL PSL marked its debut in Pakistan in 2017 when the final was held in Lahore. Since then, and as part of a gradual process to bring the entire tournament to Pakistan, three matches were played in 2018, while eight matches are scheduled to take place in 2019.

"I sympathise with the people of Pakistan because they have been cricket-starved for no fault of theirs, but I am optimistic that the days are not too far when international cricket will return to Pakistan and the stadium will once again be packed with crowds.

"Due to prior family commitments, I will only be available till the last group stage game. I want to thank Lahore Qalandars for giving me an opportunity to represent them and I look forward to not only enjoying my time in the HBL PSL 2019 but also contributing in making it a stronger brand," de Villiers said.

A happy Lahore Qalandars' owner Fawad Rana said: "There can't be bigger and better news for Pakistan cricket fans and the HBL PSL 2019 on the day we are celebrating 'one month to go' that AB de Villiers has confirmed his availability for the two Lahore matches.

"De Villiers is one of the icons of international cricket, who has entertained his fans world-over, not only with his innovative and aggressive batting but also with the flare, passion and agility that he always carries with him onto the field of play", he said.

"I am certain he will further brighten the Gaddafi Stadium with his amazing talent and skills on 9 and 10 March and this good news is a gift for our Qalandars clan", Rana added.

De Villiers's commitment to play in front of the cricket-mad Lahore crowds will undoubtedly give credence to the Pakistan Cricket Board's stance in which it has been emphasising and assuring the cricket playing nations that Pakistan is now as safe and secure a country to play in, like any other place in the world.

PCB Chairman Ehsan Mani said: "We appreciate the decision of AB de Villiers and look forward to welcoming him to the home of Pakistan cricket. I am sure de Villiers's appearance will attract new fans, and more eyeballs will follow the HBL PSL than ever before.

"I am confident that de Villiers's decision at the back of his fellow World XI, Zimbabwe, Sri Lanka and the Windies' cricketers' decisions to play in Lahore will encourage other leading cricketers and international sides to visit this cricket-passionate country".

"For the Lahore crowds, it will be a great opportunity to watch this generation's cricket genius live in action. I am sure they will turn up in great numbers to support de Villiers as well as Lahore Qalandars and their opponents", he said.

Lahore Qalandars captain Mohammad Hafeez said: "De Villiers is one of the most respected cricketers in the world. He is a proven performer, who has added new dimensions to batting in white-ball cricket".

"Not just me but the entire Lahore Qalandars side will wait eagerly for the unique experience of sharing with him a flight to Lahore and then being in the same team kit in front of what I envisage will be a packed house", he said.

"This will again be an opportunity for the Lahore crowds to show their passion, respect, love and hospitality, and I am confident that AB will take home memories which will bring him back again and again to this beautiful piece of land", said Hafeez.