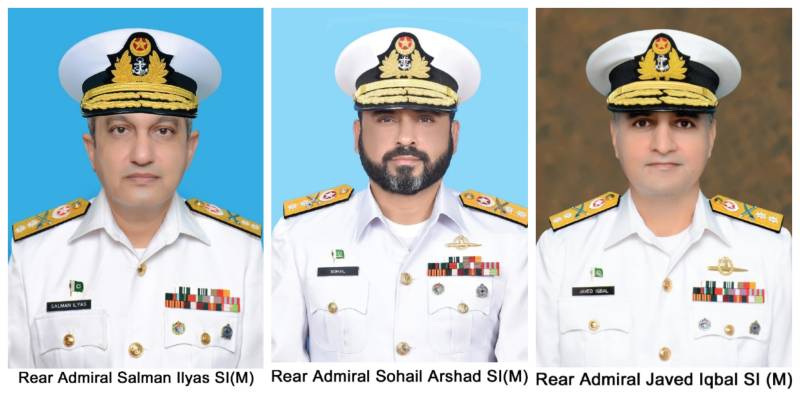 ISLAMABAD – The Pakistan Navy (PN) has announced the promotion of three commodores to the rank of rear admiral.

Commodores Javed Iqbal, Muhammad Sohail Arshad and Salman Ilyas have been promoted to the rank of rear admiral with immediate effect, a statement issued by the PN’s media wing said on Thursday.

All three newly-promoted officers are recipients of the Sitara-e-Imtiaz (Military) and are graduates of Pakistan Navy War College, Lahore and National Defence University, Islamabad.

"The officers have an illustrious service career with vast experience of various command and staff appointments," said the press release.

Salman Ilyas was commissioned in the construction branch of Pakistan Navy in 1990. He holds a Master's degree in Naval Architecture from the UK.

He also served as director naval construction at the Naval Headquarters in Islamabad.

Muhammad Sohail Arshad was commissioned in the weapon engineering branch of Pakistan Navy in 1989. His command appointments include deputy managing director submarine and general manager submarine projects at PN Dockyard.

His major staff appointments include staff officer (electrical) at COMSUBS, staff officer (submarine) to commander logistics at the Headquarters and member technical AGOSTA 90-B Submarine in France and director-general submarine projects.

Javed Iqbal was commissioned in the weapon engineering branch of the Pakistan Navy in 1989. He holds a Master's Degree in Communication and Electric Systems from the United Kingdom and has held various commanding positions including commanding officer NPEC and commander technical support (coastal) Jinnah Naval Base in Ormara.