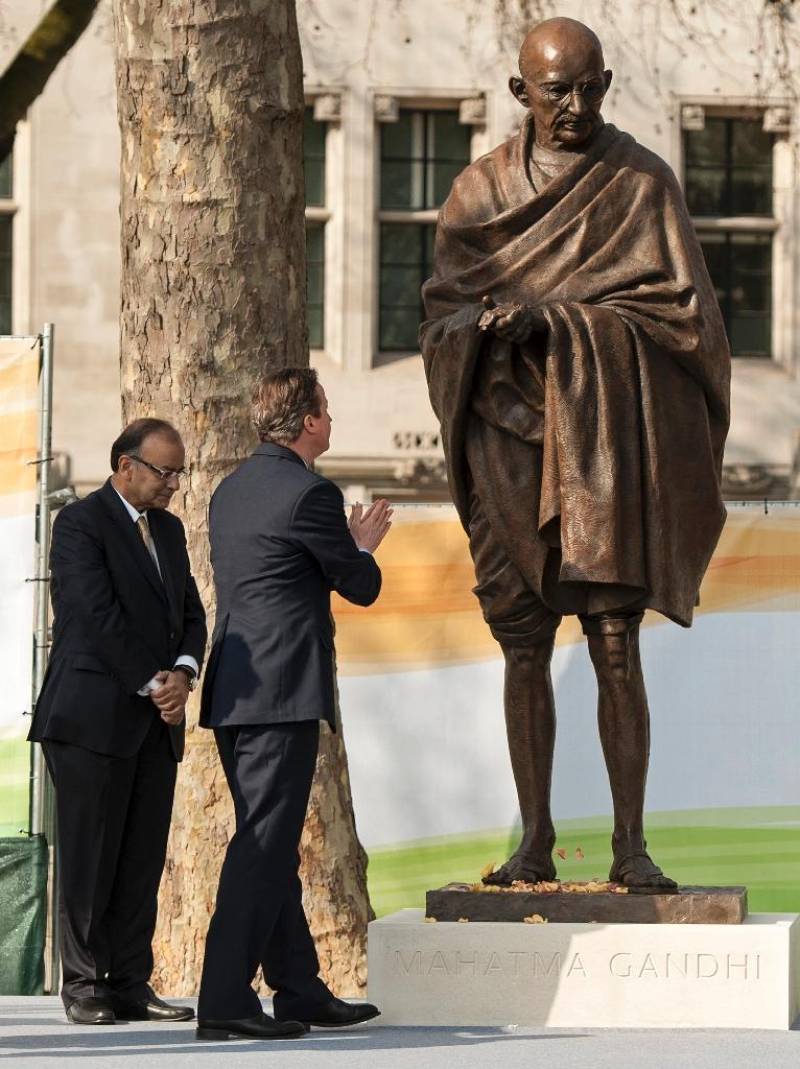 LONDON (APP) - A statue of Indian independence leader Mahatma Gandhi was unveiled on Saturday at the symbolic heart of the British establishment that once loathed him for his campaign against imperial rule.

Gandhi joins figures including Britain's World War II leader Winston Churchill, who described him as a half-naked "fakir", in London's Parliament Square, opposite Big Ben and the House of Commons.

Hundreds of people gathered to watch, while a band played Indian classical music and Indian flags flew around the square.

Despite such pomp, Gandhi was historically resented by many in Westminster as the leader of the non-violent campaign for Indian independence from Britain, which was granted in 1947.

In a speech at the event, Cameron hailed Gandhi as "one of the towering figures in the history of world politics" and said that the statue would give him "an eternal home in our country".

The unveiling marks the latest step in Britain's efforts to recast both its past and present in India, once known as the "jewel in the crown" of the British empire.

In 2013, Cameron became the first British premier to visit the site of a notorious massacre in Amritsar in 1919 where troops under British control gunned down hundreds of unarmed protestors.

He described the killings as "shameful" but stopped short of a public apology.

Cameron has also made boosting economic ties between India and Britain -- home to some 1.5 million members of the Indian diaspora -- a priority.

When he came to power in 2010, he said he wanted to double trade with India by this year.

Jaitley, who has described the relationship with Britain as a "partnership of equals", said the unveiling marked the coming together of the world's oldest and largest democracy.

But he noted the irony of Gandhi's statue being located so close to that of Churchill, who was fiercely opposed to Indian independence.

The statue, which stands nine feet (2.7 metres) high, is by respected sculptor Philip Jackson and is based on a photograph of Gandhi taken when he visited London in 1931.

It marks 100 years since Gandhi returned to India from South Africa, where he was repeatedly jailed for pressing the rights of Indians and started his non-violent campaign of civil disobedience.

It faces the Houses of Parliament and is situated between the statues of anti-apartheid icon Nelson Mandela and US president Abraham Lincoln, who decreed freedom for Confederacy slaves in 1863.

Churchill, whose statue is a stone's throw from Gandhi's on the other side of the square, took an extremely dim view of the Indian barrister's actions.

"It is alarming and nauseating to see Mr Gandhi, a seditious Middle Temple lawyer now posing as a fakir (ascetic) of a type well known in the east, striding half-naked up the steps of the vice-regal palace," he said in 1931.

Churchill even suggested that Gandhi should be "trampled on by an enormous elephant" because of his campaign against British rule, according to biographers.