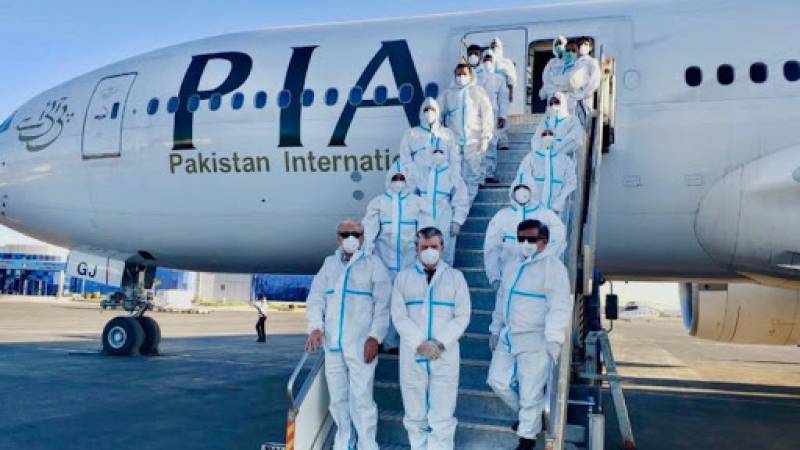 LAHORE – A special flight of Pakistan International Airlines has brought back three bodies of Pakistani nationals, who died due to COVID-19 infection in Spain, the national flag-carrier said on Thursday.

The bodies were handed over to their heirs by Station Manager and Cargo Terminal Manager, according to a PIA spokesperson.

It came after the federal government granted permission to overseas Pakistanis to bring the bodies of Covid-19 victims home but after strictly following the guidelines issued by the health ministry and Civil Aviation Authority to avoid the spread of infections.

Under the guidelines, the body should be enclosed in a sealed coffin in compliance with the airlines’s rules and regulations.

Anyone coming in contact with the body must ensure the standard preventive measures, including hand washing and disinfection pre- and post-interaction with the body.

Minimum number of staff should be involved in handling and transferring of the body and they should wear appropriate personal protective equipment, long-sleeved fluid resistant gown, gloves, face shield or goggles, N95 mask and boots.

The environmental surfaces or waiting rooms where the body was kept before transferring to the aircraft should be disinfected and cleaned properly. While air transporting, the body should be wrapped in two clothes soaked in 10 per cent formalin solution.

ISLAMABAD - The government of Pakistan has allowed air transportation of COVID-19-infected bodies to bring back ...

Spain is second hardest hit country, after the U.S., with a total of 271,095 number of confirmed cases of COVID-19 including more than 27,000 fatalities. More than 183,000 people have also recovered from the illness.