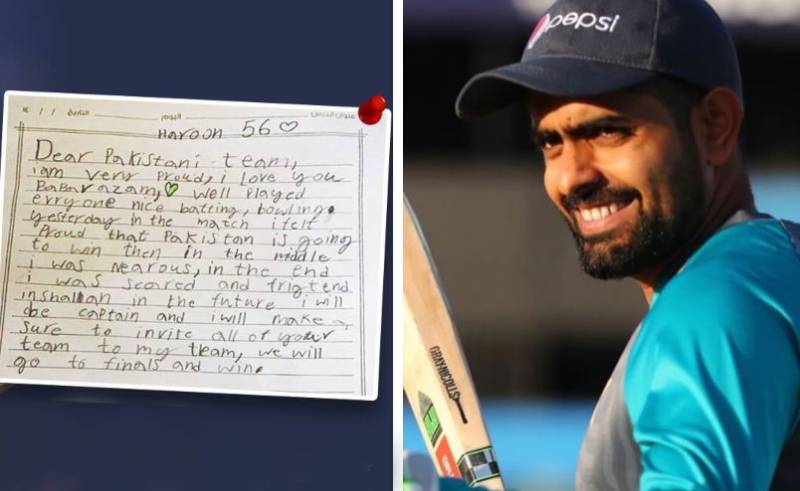 LAHORE – Babar-led Pakistani team has received an honest handwritten letter from an eight-year-old fan as Green Shirts exited the T20 World Cup after losing to Aussies.

A handwritten letter in praise of the batsman and Pakistani team, written by 8-year-old Mohammad Haroon Suria made headlines after a Pakistani journalist shared it on the microblogging platform.

The number one T20 batsman who replied to the viral letter is winning the internet with his beautiful and heartfelt message.

Aspiring Suria, who was dubbed 'future captain' by Azam, hailed Pakistan’s performance and said he will lead the Pakistan cricket team in the future.

He also requested Babar to send him autographs of the whole Pakistani squad and ended the note by saying that whether Pakistan wins or loses, ‘we still love you’.

Pakistan’s ace batter expressed gratitude to the young one for the ‘kind letter’ and called him a ‘champion’.

Thank you for such a kind letter for us, champion. I ABSOLUTELY believe in you and you can achieve anything with your focus, belief, and hardwork.

You will get your autographs but I cant wait to get YOUR autograph future Captain. 🙌 https://t.co/FbalPUeBnC

"I absolutely believe in you and you can achieve anything with your focus, belief, and hard work," the Pakistani captain wrote and promised to get the team's autographs.“I can't wait to get your autograph in the future, he added while cheering the young one's spirit.