Protesters booked for ‘chanting slogans against security forces’ in Swat 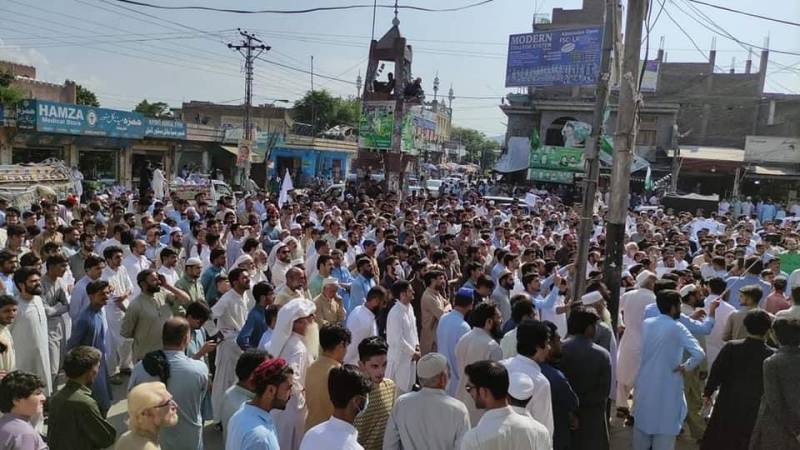 SWAT – Khyber Pakhtunkhwa lodged an FIR against some of the participants of ‘peace protest’ who chanted slogans against the security forces.

Protesters took part in a peace rally in the Khwazakhela area of Swat valley – one of the major tourist attractions in the northwestern region.

Swat District Police Officer told a local publication that the FIR was lodged as some of the participants tried to defame the state institutions. He also warned of stern action if anyone defames the institutions of the country.

The development comes as locals stage a protest on Friday demanding an end to the presence of militants in the picturesque valley.

After Dir and Waziristan people have come out in Swat to protest against comeback of TTP in the scenic valley. Earliest this week, Taliban had detained three army and one police officers in Matta, who were released after negotiations with local elders pic.twitter.com/vL0Ewz6Z7B

There have been reports of spotting militants in Swat, however, the media wing of the Pakistan Army dismissed such reports.

“During the past few days, a misperception about the alleged presence of large number of proscribed organization TTP’s armed members in Swat Valley has been created on social media. After confirmation on the ground, these reports have been found as grossly exaggerated and misleading,” ISPR said.

The Military’s media wing acknowledged the presence of a small number of armed men on a few mountain tops between Swat and Dir, located far away from the population, saying these individuals sneaked in from Afghanistan to resettle in their native areas.

RAWALPINDI – Pakistan Army on Saturday cleared the air about presence of a large number of militants belonging to ...

The development comes as Pakistan has been holding peace talks with the outlawed Tehrik-i-Taliban Pakistan, with both sides agree to an indefinite ceasefire in June this year.

ISLAMABAD – The Pakistan government and banned Tehrik-i-Taliban Pakistan (TTP) has agreed to extend ceasefire for ...