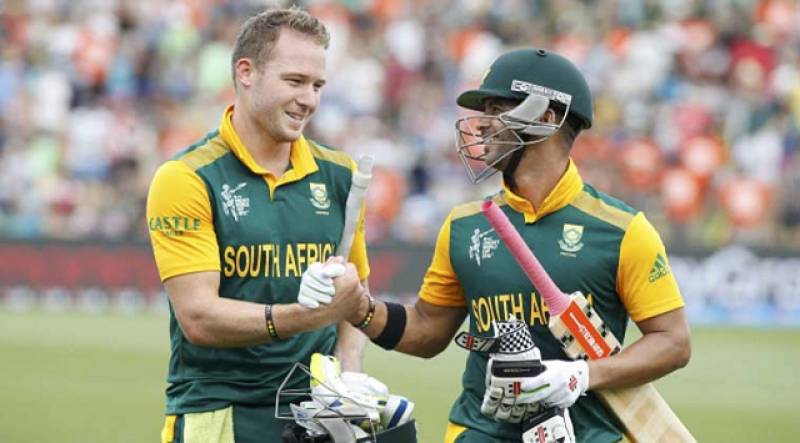 HAMILTON (Web Desk) - South Africa has won against Zimbabwe by 62 runs in the world cup 2015 at Hamilton stadium.

Miller (138 not out) and Duminy (115 not out) rescued the Proteas’ innings after they had been in trouble at 83 for four, as they put on a world record fifth-wicket stand of 256 to guide their side to 339 for four.

Elton Chigumbura’s side, however, also showed that they would be a dangerous opponent for many sides with opener Chamu Chibhabha (64), Hamilton Masakadza (80) and Brendan Taylor (40) showing they were all highly competent international batsmen. They had been on 214 for three and well set to push on for the final 15 overs before Taylor’s dismissal effectively ended their resistance and they were bowled out for 277 in 48.2 overs.

Zimbabwe had earlier exploited the slow nature of the pitch to put the World Cup favourites under pressure, but in reality they lost the game in the final 10 overs of South Africa’s innings when they conceded a staggering 146 runs.

Miller and Duminy, who had been together for almost 20 overs by that stage simply changed gears in the final 10 as they peppered the boundary fences. The 25-year-old Miller moved from 50 to 100 in 28 balls and after he had brought up his second one-day international century he attacked Solomon Mire in the 48th over, smashing 30 runs. He finished on 138 and the nine sixes in his 92-ball knock were also a World Cup record.

South Africa’s vaunted pace bowlers Dale Steyn and Morne Morkel failed to really trouble Zimbabwe’s batsmen when they began their innings. Steyn did not even open the bowling and when he did bowl, his first five overs cost 38 runs for no wickets as he bowled too short while the wicket nullified a lot of his pace. He finished with 1-64 from nine overs. Vernon Philander, who bowls a fuller length and was able to exploit the pitch better, did cause Zimbabwe some issues, though it was the slower bowlers who were the most dangerous.

Leg-spinner Imran Tahir was a constant threat and he took the wickets of both Chibhabha and Masakadza before he finished with figures of 3-36 from 10 overs.