Two injured as PTI, PML-N lawmakers toss copies of budget book at each other in NA 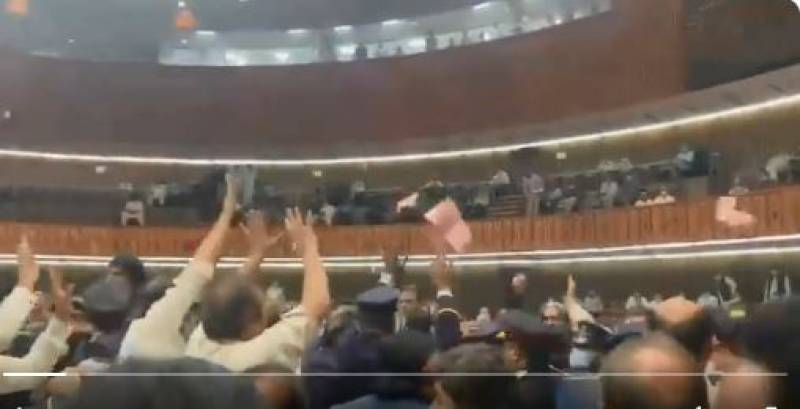 ISLAMABAD – A PTI lawmaker and a member of the security staff were injured when the treasury and opposition lawmakers traded barbs and tossed copies of the budget book at each other during a debate on the budget in the National Assembly on Tuesday.

As PML-N President Shehbaz Sharif, Leader of the Opposition in the National Assembly, started addressing the session and raised his concerns about the budget unveiled by the Imran Khan-led PTI government for the next fiscal year, PTI legislators raised slogans and blew whistles to interrupt him.

Govt protesting against the opposition in the National Assembly 😀 pic.twitter.com/OY7JYqFcmy

PTI lawmakers were apparently trying to settle score with the the opposition by interrupting Sharif as PML-N lawmakers had created a ruckus in the lower house of the parliament when Finance Minister Shaukat Tarin presented the budget last week.

On Tuesday, the situation aggravated when PTI lawmaker Ali Nawaz Awan was caught hurling abuses at opposition leaders in the presence of his women colleagues. The two sides ended up throwing budget books at each other.

As the two sides were tossing budget books at each other, PTI MNA Maleeka Bokhari, who serves as Parliamentary Secretary for Law and Justice, and a member of the security staff were injured.

Security officials were trying to pull the lawmakers away when one of them was injured.

ISLAMABAD – Ali Nawaz Awan, a lawmaker of ruling PTI in the National Assembly, was filmed hurling naked abuses at ...