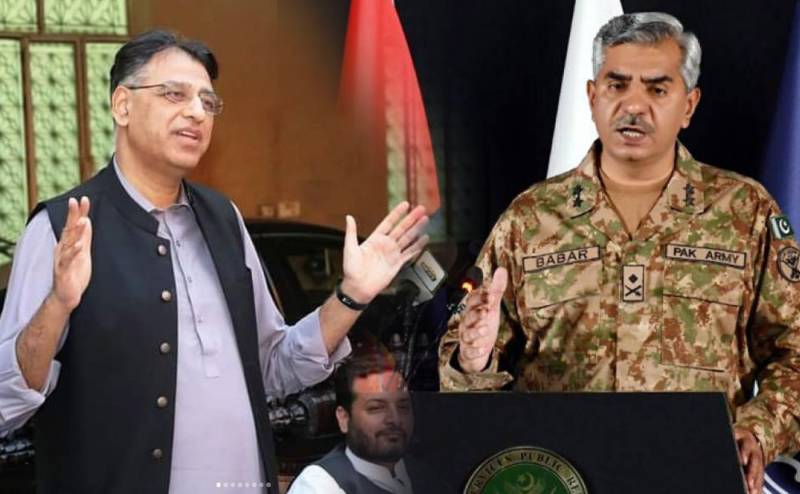 ISLAMABAD – Former minister and PTI General Secretary Asad Umar reacted to the remarks made by Inter-Services Public Relations (ISPR) director-general Maj General Babar Iftikhar in which he trashed the claims of a foreign conspiracy against the ousted government.

The senior PTI leader held a presser in the country’s federal capital earlier today, in which he advised the army spokesperson not to interpret the political affairs.

He mentioned that Pakistan Tehreek-e-Insaf had decided to reiterate its viewpoint. Asad added that the facts written in the cable were equal to an open threat to Pakistan. Chairman Imran Khan will again write to Supreme Court to constitute a judicial panel and hold a transparent inquiry into the matter, he announced.

He said the ‘imported government’ was imposed following a conspiracy, saying political parties must be allowed to discuss among themselves, but it is important that a response must be given as an army spokesman has commented on the matter.

The PTI secretary general mentioned that he was unable to understand why the DG ISPR had to raise the issue again when he himself appealed to the politicians not to drag the armed forces into politics.

On Tuesday, Major General Babar Iftikhar reiterated that no conspiracy was found during the National Security Committee huddle.

Speaking with a local media outlet, the army official said the NSC meeting, attended by all three services chiefs, DG ISI, and others were briefed on the cipher issued and the participants were told no conspiracy was found in it.