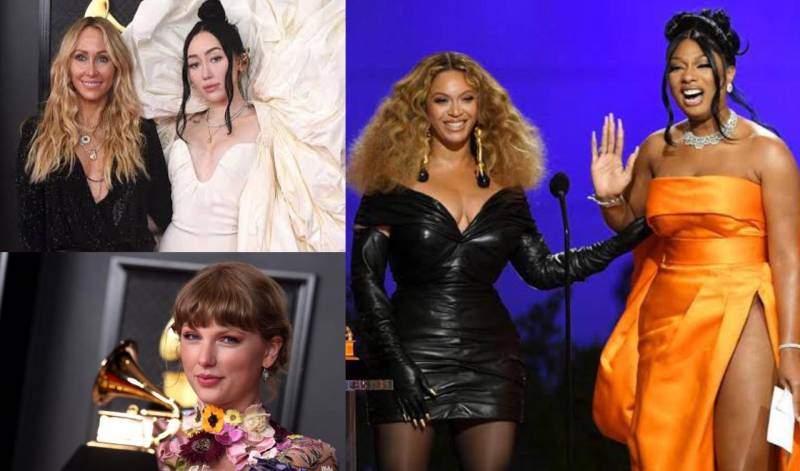 Music’s biggest night Grammys kicked off on a different note this time as the women emerged victors as they made Grammy's history.

Grammy's is a traditional fashion parade with a major chunk of the industry’s top names attending and performing the socially distanced gala in Los Angeles was a visual treat.

Hosted by Trevor Noah, the celebration was packed with pre-recorded and live performances by the likes of Lipa, Taylor Swift, Post Malone, DaBaby, Black Pumas and Mickey Guyton. Cardi B and Megan teamed up to perform their summer single WAP.

🎶Ya yo me enteré, se nota cuando me ve 🎶

Taylor Swift and Billie Eilish took the top prizes at the Grammy Awards but Queen Beyonce emerged as the true victor.

Swift’s surprise record Folklore which was recorded during coronavirus lockdowns was named album of the year making Swift the first woman to take home the prize the third time.

Megan Thee Stallion won two more awards for her single Savage featuring Beyonce. Eilish’s ballad Everything I Wanted won record of the year along with her theme song for the upcoming James Bond movie No Time to Die.

Moreover, the ceremony was also aimed at moving past the devastating effects of the pandemic that visibly halted the growth of the live music industry.

Moreover, Dua Lipa won best pop vocal album for her dance Future Nostalgia and spoke of the value of music during hard times.

The ceremony took place both indoors and outdoors in Downtown Los Angeles but mostly without the elaborate sets and special effects that traditionally mark the highest honours in the music business.

Some of Sunday’s awards were announced at small venues in cities like Nashville, New York and Los Angeles.

K-Pop band BTS lost in the best pop duo or group performance against Lady Gaga and Ariana Grande for their single Rain on Me but performed their hit English-language single Dynamite from South Korea at the close of the show.

On a lighter note, Singer Noah Cyrus certainly grabbed attention as fans were left amused after memes poured in for the eccentric look.

Amidst the surging coronavirus cases in Los Angeles, the organisers announced that the Grammy Awards ceremony has been ...