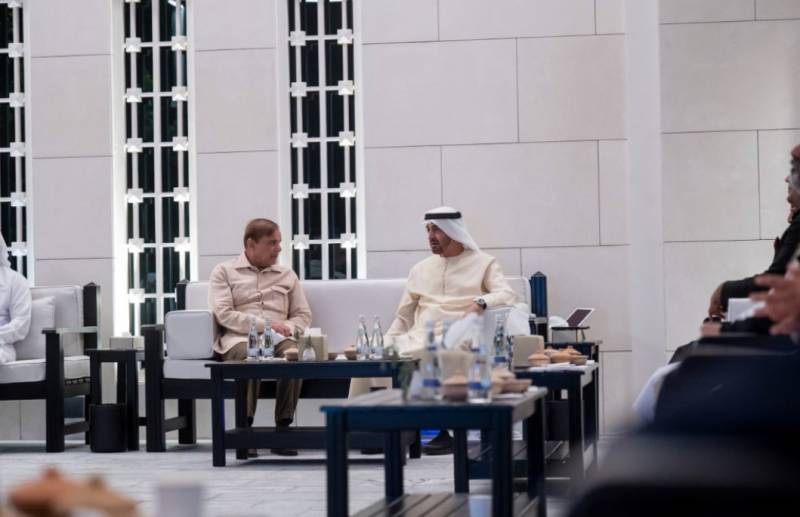 Report of state broadcaster said several members of the royal family were also present at the condolence reference while Pakistani premier was accompanied by Defence, Interior Ministers and envoy to UAE Afzal Mahmood.

PM Sharif conveyed the deep sympathy and condolences of the leadership, government and people of Pakistan to the leadership of the United Arab Emirates.

During the meeting, the premier also conveyed best wishes to Sheikh Mohamed bin Zayed Al-Nahyan upon assuming his responsibilities of the Middle Eastern state.

Meanwhile, Sheikh Mohamed also conveyed sincere gratitude to PM Sharif and the people of Pakistan for their solidarity during the hour of grief. Both sides also reiterated their commitment to further deepen the relationship in all dimensions.

Earlier, the Foreign Office said Pakistan and UAE got a close fraternal relationship under the leadership of Sheikh Khalifa, and the ties between the two sides scaled new heights.

Pakistan also announced a three-day national mourning period from May 13-15, with the national flag at half-mast.

ISLAMABAD – Pakistan has announced to observe three-day mourning over the demise of United Arab Emirates ...

United Arab Emirates President Sheikh Khalifa bin Zayed Al Nahyan passed away at the age of 73. Sheikh Khalifa, who had been ruler of the richest emirate, was rarely spotted in public since suffering a stroke in 2014.