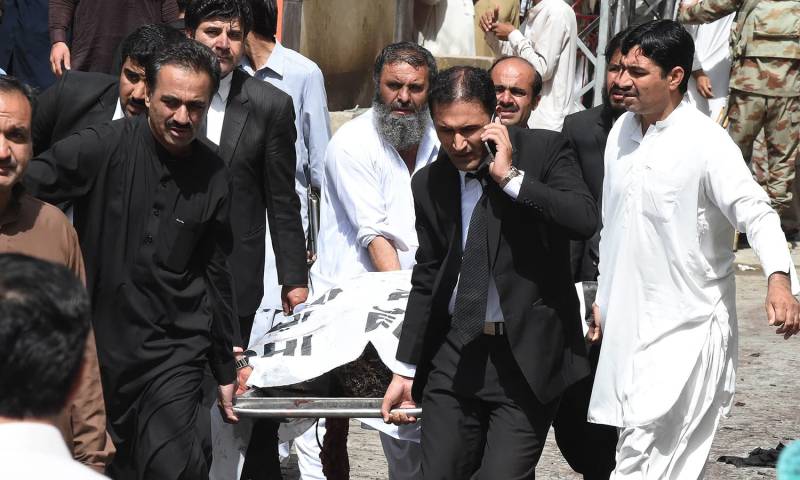 SYDNEY - At least 956 people were killed in 736 terror attacks in Pakistan in 2016, according to the Global Terrorism Index (GTI) released on Wednesday.

The figures show a significant decline in terror fatalities as compared to 2015.

Afghanistan and Syria displayed a similar trend, as four of the five countries most impacted by terrorism saw a 33 percent decrease in terror fatalities.

Although the total number of people killed in terror attacks worldwide fell for the second successive year, more countries were victims of terror in 2016, the report produced by Australia’s Institute for Economics & Peace showed.

The report found there were 25,673 deaths last year due to terror attacks ─ down 22 percent from a 2014 peak. However, 77 countries experienced at least one fatal attack, more than at any time in the 17-year history of the Global Terrorism Database, on which it is based.

The GTI called the falling victim numbers the “main positive finding” and “a turning point in the fight against radical Islamist extremism.”

Not all findings in the report were positive, however; the GTI found “disturbing” trends in the worldwide spread of terrorism.

A dozen more countries were the victim of a deadly strike last year than in 2015.

The report’s authors also warned of the potential for IS fighters from Iraq and Syria to join new radical offshoots in other countries.

In Afghanistan, they described the picture as “complex” in 2016, as the Taliban reduced attacks against civilians but stepped up conflict with government forces.

In Europe and other developed countries, it was the deadliest year for terrorism since 1988, excluding the September 11 attacks in 2001, according to the GTI.

It blamed IS activity for the continued spike there, with 75pc of terror-related deaths in these countries directed or inspired by the organisation since 2014.

“There has been a general shift towards simpler attacks against non-traditional and softer civilian targets,” the authors noted.

However, they also found the IS’ “diminishing capacity” had led to a sharp drop in the number of deaths in the first half of 2017.

The dataset, collated by the America’s University of Maryland, is considered the most comprehensive of its kind globally.