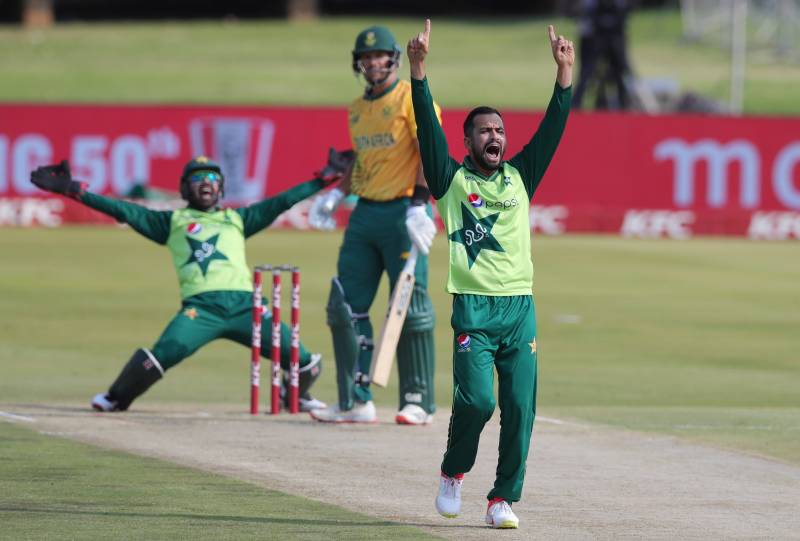 With an impressive performance by Fakhar Zaman, Pakistan thrashed South Africa by three wickets in 4th and last T20I match to win the series at Supersport Park in Centurion on Friday.

Chasing 145 runs target, Shaheens hit 149 runs in 19.5 overs at the loss of seven wickets. Zaman smashed stunning 60 of 44 balls while Babar Azam made 24 runs before he was removed by Lizzad Williams.

Mohammad Rizwan, who earned various titles in first three matches with his thrilling performance, was sent to pavilion for duck in the final match of the series.

Earlier today, Pakistan won the toss and elected to bowl first against Proteas.

Jenneman Malan and Rassie van der Dussen remained top scorer from Proteas as they made 33 and 55 respectively.

However, no other player could make double digit except Aiden Makaram, who scored 11 runs.

Pakistani bowlers sent all Proteas players to pavilion in 19.3 overs

Earlier, Pakistan won the toss and elected to bowl first against South Africa.

The final game will start at 05:30 pm Pakistan Standard Time.

Captain Babar Azam says they are confident to keep going with the same momentum in today's match. At a virtual press conference, the skipper said he was optimistic that the team would repeat the same performance in the final match.

"The outcome of the series relies upon the 4th T20 result," Babar said, vowing that they are looking forward to continue with the same tempo which they had shown in the third T20.

“We’ll try our best to show you the best performance in the final game against South Africa,” the 26-year-old added.