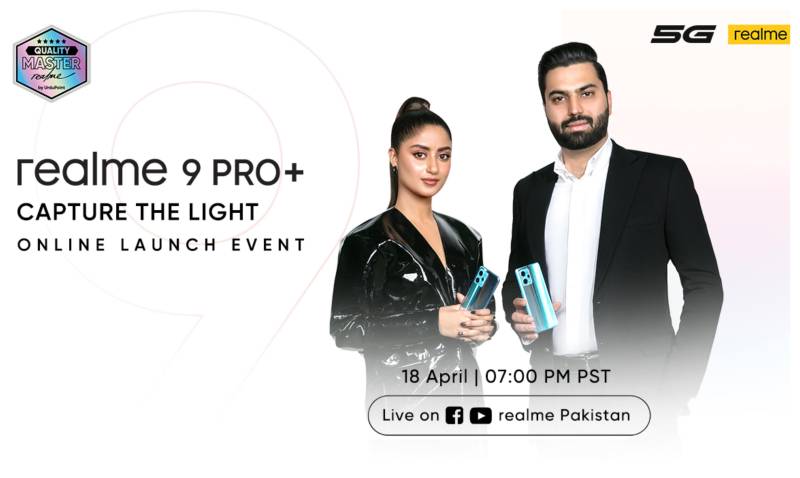 realme as a brand has truly been dedicated to developing the technological sphere since its inception in 2018. Its brand philosophy of Dare to Leap emphasizes the scope of realme’s ambition, daring to dream of advancements that seem impossible or of the dissemination of high-end tech into lower price brackets than it may seem practical to do.

Over the years realme has pioneered many tech leaps in their price segment, especially with the number series, such as the introduction of 90Hz display in the realme 6 series and the introduction of 108MP infinity camera in the realme 8 series. realme has made waves in the Pakistani market since its arrival, establishing itself as a rising force in the telecommunications industry.

The Pakistani market has proven to be very price sensitive with customers that give great importance to getting high value for money from their smartphones. Recently, realme has appointed Syed Mashood Hassan as the brand’s new country director. Syed Mashood came to the role with a wealth of experience working in the telecommunications sector, previously having been part of the Samsung and Huawei teams in the country. We sat down with Syed Mashood recently and discussed realme’s activities over the past few months as well as the vision realme has for the Pakistani market in the coming year.

Over the past few months, realme has been on the rise. The tech democratizer’s month on month growth totals up to a staggering 45%, which shows that realme’s sustained efforts in the market over the past few months have proven to be very fruitful. The realme assembly plant inaugurated earlier this year also has a big hand in the impressive growth of realme. The benefit of starting assembly within the country rather than relying exclusively on imports is that the manufacturing related costs for realme products have gone down significantly. The benefit of this is passed down to the customers as the prices of realme products continue to get slashed. This makes them even more attractive to the value-conscious market.

One of the most popular product lines released by realme in the country is the realme C series as it is a high value for money product line and accounts for a major portion of the brand’s sales. With the assistance of its three suppliers: Airlink Communications for the North region, M&P for the Central region, and United Mobile for the south, realme has increased stock coverage across the country up to an impressive 3000+ stores.

When it comes to the future, realme has massive plans. For the purpose of creating customer touch points, realme is planning to open up 40 brand stores all across the country which would provide customers assistance for realme’s more premium products such as the realme GT series or the realme 9 series.

Brand stores are just the tip of the iceberg as realme also plans to 10 exclusive realme stores which will offer the complete realme experience. Customers can come to realme brand stores to purchase any of realme’s products including its AIoT line as well to get assistance regarding any previously purchased product. realme’s target for the year is to amass an overall 12% share of the total market and with the exciting support features and products coming in the pipeline it looks like they could achieve their goal.

One of the exciting new products in the pipeline which will be releasing very soon is the realme 9 Pro+. The realme 9 Pro+ is the latest in the number series of phones which means it is essential that the phone’s key features feature some kind of tech leap. The first tech leap that the realme 9 Pro+ comes with is the first-in-segment Light Shift Design which transforms the rear panel from a cool sunrise blue to a warm red when exposed to sunlight or UV rays. This aesthetic design is a reflection of the changing color of the sky during sunrise or sunset and really speaks to realme’s commitment towards experimenting with new and iconic designs.

The second major tech leap that the realme 9 Pro+ has to offer is the inclusion of a 50MP Sony IMX766 OIS sensor as part of the triple rear camera setup. This cutting edge sensor is able to capture 63.8% more light than its previous generations. This vastly increases the realme 9 Pro+’s performance in low-light and nighttime settings. The large 50MP sensor is able to store more information about the scene you are trying to capture leading to a more detailed, impressive, final photo. The upcoming smartphone has a plethora of other exciting features such as 60W SuperDart charging, a 4500mAh battery, and 90Hz Super AMOLED display among others.

After looking at realme’s journey in Pakistan so far, it is clear that the smartphone brand has a lot of potential for growth in this market. With an experienced leader like Syed Mashood joining their ranks it will be exciting to see what heights realme is able to reach in the coming year. The spirit of innovation is highly important in realme’s new releases and we can expect lots of unique and exciting features to continue to pop up in their new releases. For now, you can look forward to the realme 9 Pro+ which will be available for pre-order starting Monday, April 18, 2022. You can join realme on the day for the official launch event which will be streamed live at 07:00PM PST on YouTube and the official realme Pakistan Facebook page.