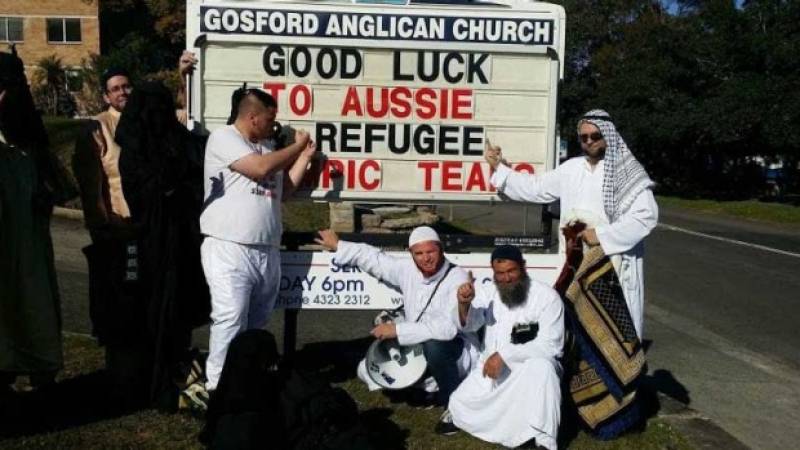 AUSTRALIA (Web Desk) - Stooping to the lowest level, a far right racist group in Australia entered into a church disguising as Muslims and interrupted the church mass fueling the fire of anti-Muslim sentiments.

The group named "Party for Freedom" gathered at Gosford Anglican Church in New South Wales on Sunday to stage a spectacle in which they pretended to pray while using a loudspeaker to blast out what sounded like a Muslim prayer. Before leaving the place, they chanted anti-Islam slogans.

The group expressed that the protest was against Father Bower, who preaches at the church. They say they are against his making friends with Islamic preachers and being favorable toward a multicultural Australia.

Reflecting on the brainless attitude of zealots, Father Bower showed annoynace and claimed that he knew, they were not Muslims.

"It was just out of the blue, some of the congregation were quite upset, I recognized one of the participants and clearly they weren't Muslims,it was mock attire, I took a minute or so but I worked out who they were. I quietened the congregation down" he said.

One of the group leaders instead of feeling ashamed, blatantly justified the apparent wrongdoing.

“I don’t have to apologize because we didn’t hurt anybody, it was only words and it was a protest sort of thing, it’s very different to going with the intention of physically hurting somebody" leader Nick Folkes told media.

Australian Federation of Islamic Councils president Keysar Trad said the protest was a "low act" and claimed Senator Hanson "has inspired these people".

The group that supports Donald Trump ideology reportedly chanted support for the right-wing populist party in Australia, One Nation Party however, One Nation leader Pauline Hanson has since said the group’s protest is “counter-productive” and wished to disassociate herself from it.

Racial profiling is on the rise in Australia and the latest xenophobic attack on Muslims vindicates it fully.