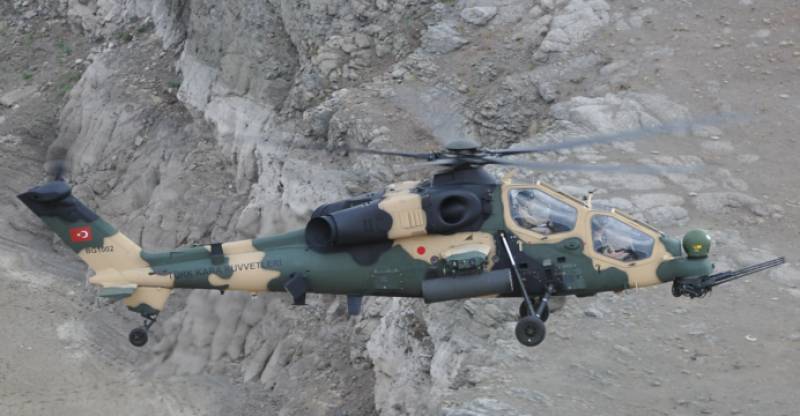 The T129 ATAK is outfitted with about 76 rockets for close air support and advanced electronic war armaments and can undertake high-altitude missions with heavy artillery.

"Contract negotiations on T129 ATAK helicopters between Turkish Aerospace Industries (TAI) and the Pakistani Ministry of Defense Production were finalized."

Turkey will provide the helicopters gradually over five years, the sources also said.

The statement disclosed that Turkey has secured the largest single export in the history of the Turkish defense industry.

The deal between the two brotherly countries for the military conveyance was originally reported by aviation journalist Alan Warnes who hinted that the Turkish side was hoping for a concrete deal by late 2017 or early 2018.

Pakistan examined the T129 in June 2016 and was impressed by the T129’s performance in high-altitude conditions and its ferrying range. The Army had flown the P6 from Pano Aqil, the Hindu Kush (at 14,000 ft) and between Quetta and Multan (i.e. 480 km) according to Turkish Aerospace Industries (TAI).

The PAF could also theoretically use the T129 as a CAS asset (close air support) for its combat search and rescue or special operations forces requirements. Alternatively, it could seek several units as training units at the Airpower Centre of Excellence, which is to train for counterinsurgency-related CAS.

The T129 is an upgraded variant of the AgustaWestland A129 Mangusta, which flew in 1983 and entered production that year for the Italian Army. Derived from the A129CBT, the T129 benefits from an uprated engine (i.e. LHTEC CTS800-4A), airframe modifications as well as new tail rotor and drive train.

Turkey selected the T129 in 2007 with manufacturing and third-party export rights. Aselsan, Roketsan and Havelsan developed weapons and subsystems for the T129.