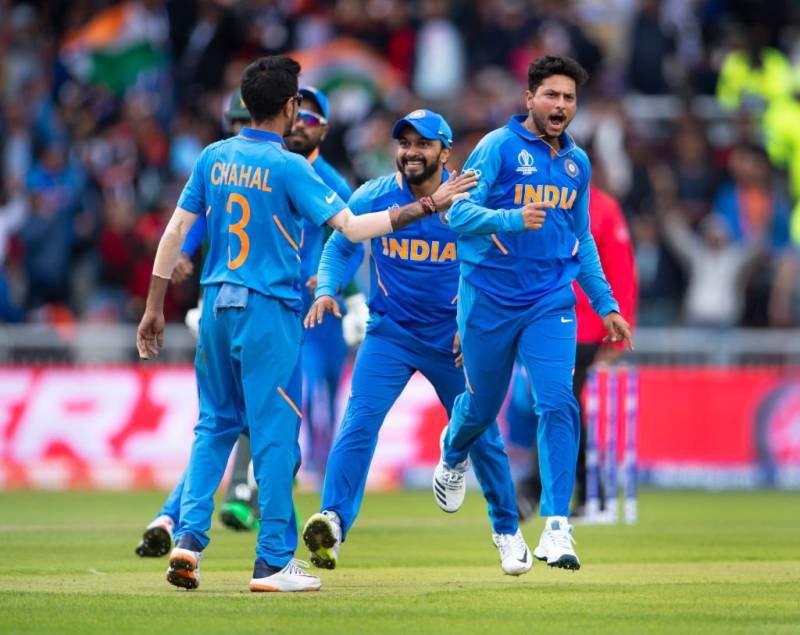 MANCHESTER - India brushed aside Pakistan by 89 runs (DLS) in the 22nd match of the ICC World Cup in Old Trafford on Sunday.

Pakistan won the toss and elected to field first, much to the dismay of cricket fans; the decision apparently proved flawed as India managed to set 337 runs target.

Rohit Sharma scored 140 runs off 113 balls while Virat Kohli contributed 77 off 65 balls. Only Muhammad Aamir resisted the Indian batsmen as he took three wickets for 47 runs.

In response, Pakistan's batting line-up crumbled in the initial overs as it lost five early wickets with Shoaib Malik going back to the pavilion on the very first delivery.

For Pakistan, Fakhar Zaman made 62 runs off 75 balls while Babar Azam contributed 48; Pakistan made 212 runs in 40 overs.

On the other hand, Vijay Shankar, Kuldeep Yadav and Hardik Pandya took two wickets each.

Rain interrupted the play twice and by Duckworth–Lewis–Stern method (DLS), Pakistan lost the match by 89 runs.

Pakistani Skipper vowed to bounce back in next games of the Cricket World Cup 2019.

Rohit Sharma's brilliant 140 and fifties from KL Rahul and Virat Kohli power India to 336/5. Can #SarfarazAhmed and Co. chase down the target?

India captain Virat Kohli said he would have made the same decision, with the overcast conditions promising to assist Pakistan to spearhead Mohammad Amir.

"We would have bowled first to be honest," he said. "The conditions are good for bowling but the wicket looks nice.

"There's a lot of attention outside of the rope but when you enter the field, it's about applying the basics of the game."

Pakistan, who suffered a 41-run loss to Australia in Taunton on Wednesday, are currently ninth in the 10-team table.

That meant this fixture has effectively become a 'must-win' game for Pakistan if they are to finish in the top four teams who will qualify for the semi-finals from the round-robin group phase.

They made two changes from the side that lost to Australia, recalling spinners Shadab Khan and Imad Wasim in place of batsman Asif Ali and paceman Shaheen Shah Afridi.

India, whose last match against New Zealand was a complete washout, made one enforced change from the side that beat champions Australia by 36 runs at the Oval.

Pakistan fans have been busy showing their support all over Manchester!#WeHaveWeWill #CWC19 pic.twitter.com/vZ8oiPvx1B

Vijay Shankar replaced Shikhar Dhawan after the opener suffered a thumb injury while making a hundred in that match.

Kohli's side have yet to lose at this World Cup after winning their completed group fixtures against both South Africa and Australia.

?? fans had a special visitor in Manchester, as former captain @captainmisbahpk met with them ahead of the team's #CWC19 clash against India. pic.twitter.com/prch2NziX6

India have also won all six of their previous World Cup matches against Pakistan.

But Pakistan thrashed their arch-rivals by 180 runs at the Oval in the final of the 2017 Champions Trophy.

More than a billion fans worldwide are expected to watch Sunday's match between the subcontinental cricket giants.

This is officially the BEST way to arrive at a cricket match ? #CWC19 | #INDvPAK pic.twitter.com/cuzg1jVSWU