‘What a shame!': Afridi lambasts lawmakers for hurling abuses at each other during budget session 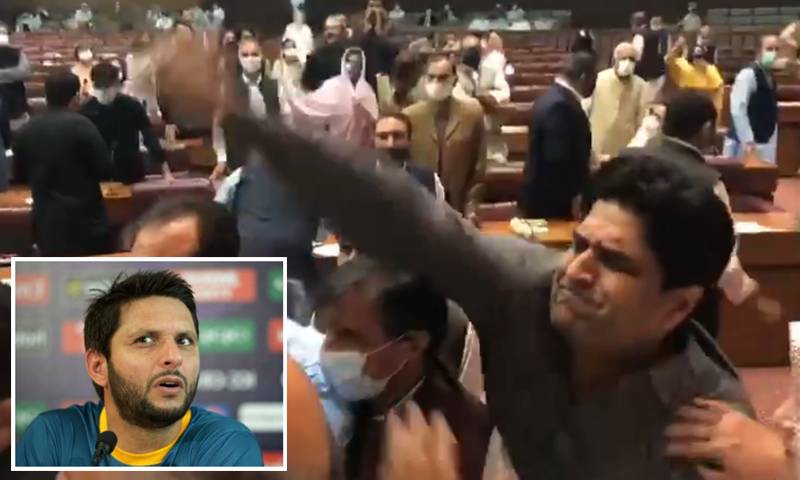 KARACHI – Former Pakistani captain and star player Shahid Afridi Tuesday denounced the shameful scenes in the NA session in which the lawmakers were seen creating a ruckus, using abusive language, and attacking each other with budget copies.

The 44-year-old cricketer took to his official handle, where he lashed out at the country’s lawmakers. He wrote ‘The uproar in the National Assembly session is nothing but a shame. Adding that, he is ashamed to see the use of abusive language and ruckus in the national assembly’.

Afridi went to say that that ‘these are our so-called representatives who just simply can’t talk to each other in a civilized manner and we cannot expect any kind of representation or prosperity from them after witnessing this kind of behavior’. 'The members should take the nails of conscience', he added.

On Tuesday, a video of the uproar in Parliament has surfaced in which the situation in Parliament seems uncontrollable when lawmakers from the ruling party and the opposition clashed during the budget session.

ISLAMABAD – Ali Nawaz Awan, a lawmaker of ruling PTI in the National Assembly, was filmed hurling naked abuses at ...

The commotion later led to the situation where they can be seen tossing budget copies while coming to blows during Leader of the Opposition Shehbaz Sharif’s speech.

Meanwhile, Speaker Asad Qaiser condemned the unpleasant incident that had taken place in the National Assembly and announced a probe into the scuffle between the members from opposition and treasury benches.

He added that such behavior of few lawmakers from opposition and treasury benches was condemnable and disappointing and maintained that unruly lawmakers will not be allowed to enter the Lower House of the Parliament.

ISLAMABAD – A PTI lawmaker and a member of the security staff were injured when the treasury and opposition ...