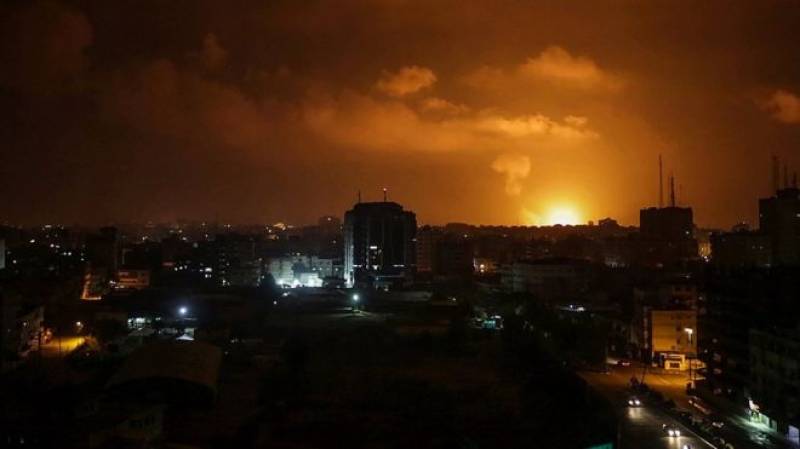 TEL AVIV - The Israeli army attacked some 100 targets in Gaza in the wee hours of Friday in retaliation to multiple rockets fired at Tel Aviv from the Strip, the evening before.

According to a preliminary army assessment, the rockets were fired at Tel Aviv by mistake during maintenance work, however, Israel ignored the glitch and responded heavily.

According to the health ministry, Israel's response left four Palestinians wounded, however, the rockets that landed in Tel Aviv did not cause any harm. Israel's military said a total of 4 rockets were fired.

Israel blamed first Islamic Jihad and later Hamas for the rocket fire, however, both organizations deny their involvement in the attack which prompted a response from Israel and could have led to a major escalation.

The group explained that the rockets had been launched during a meeting with Egyptian mediators to broker a long-term truce between Israel and it.

#Photos of the destruction caused by the Israeli occupation strikes on the Gaza strip last night.#GazaUnderAttack pic.twitter.com/yqVMW35KQ8

An Israeli defense official said on Friday that the growing assumption among Israeli army officials is that Thursday’s rockets were fired from Gaza toward Tel Aviv by mistake.

The interior ministry in Gaza said the rocket fire went against the national consensus and vowed to take measures against those involved.

The fresh wave of conflict prompted the organizing committee for the March of Return in Gaza to call off the weekly protest along the Israel-Gaza border.

The Israeli military announced on Twitter that it targeted 100 Hamas targets in Gaza, including an office complex used to plan and command the group's activities.

Israel took a strong exception to the 'mistake' and targeted areas from Rafah in the south to the north of the densely populated coastal strip that is home to two million Palestinians.

Following the turbulent night, a ceasefire was reportedly agreed between Israel and Hamas due to mediation by Egypt.

Tel-Aviv is densely populated commercial and cultural capital of Israel and it was the first time the city had been targeted since a 2014 war between Israel and Hamas; the escalation comes weeks before the general elections in Israel