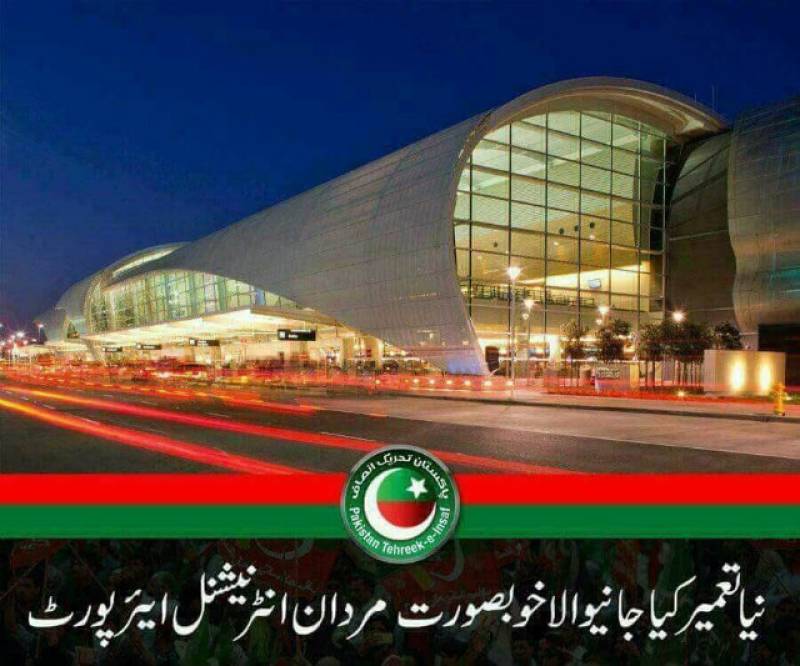 PESHAWAR - The Mardan district of Pakistan's Khyber Pakhtunkhwa province does not have an airport, let alone an international one, but PTI fans claim otherwise.

The Pakistan Tehreek-e-Insaf (PTI) led government, which holds a majority in the northern province, has just come under fire for what appears to be a questionable Photoshopping decision.

A Twitter user, Imran Tareen Khan, who goes by the name of 'PTI-KPK', recently uploaded a picture of 'Mardan International Airport built by PTI govt' using the PTI's official logo while praising the Imran Khan party for bringing 'Change' in the province.

However, while PTI supporters were cheering, the Norman Y. Mineta San Jose International Airport - a city-owned public airport in California, United States - contradicted the claim and revealed that actually, the picture is of the SJC airport's Terminal B, designed by Fentress Architects.

Please do not put your branding on images of SJC Airport. We are not affiliated with your group.

Since it was proved the 'Change' (Tabdeeli) - a popular slogan of Imran Khan's party - was a result of Photoshop, internet users started trolling the PTI and 'PTI-KPK' for this intentional ploy.

BTW they r called YOUTHIAS in our country

Don't worry, No person with a sane mind wants to be associated with this group.https://t.co/hXIacoZ4vb

Its photoshop development of KPK province by its facebook revolution team ??

International insult of @ImranKhanPTI for using the pictures of @FlySJC to show changes in kpk... Its really shamless for all those peoples who r responsible

This is a photoshopped picture created by #PMLN SMT to malign #PTI... Please ignore, their SMT has done worst in past! Everyone knows #PTI has never announced development of any airport in Mardan!

Some even suggested the US airport management to sue Imran Khan and his party.

@FlySJC please sue @ImranKhanPTI @PTIofficial for using your airport snaps, thanks you in advance

There were also a few diehard fans, who defended PTI while blaming the ruling Pakistan Muslim League-Nawaz (PML-N) for launching 'malicious' campaign against the opposition.

It was made and spread by disgraced and ousted #Panama Sharif’s Notorious media cell to malign opposition since they have nothing to defend their govt with.

This is not the first time the PTI led government in Khyber Pakhtunkhwa has found itself in trouble over the propagation of false facts.

Earlier this week, it was discovered that they tried to pass off pictures from Switzerland as being from Peshawar in an official newspaper advertisement.

The advertisement, published in an Urdu daily as well as being promoted on government’s various social media pages, depicted a picture of a waste management truck meant for maintaining the cleanliness of streets. However, it was later pointed out that the truck so proudly displayed as part of the ad does not exist anywhere in the country as it is a street cleaning vehicle from the Central European nation of Switzerland.

The Pakistan People’s Party (PPP) leaders particularly seemed to take offence to the action since vehicles similar to the one used in the KP government ad have been introduced by them in Sindh.

PPP representative Majid Agha reacted to the event saying “What the PTI Govt is faking through Photoshop in KPK for advertising & deceiving people, Sindh Govt has launched it long ago to serve the masses without any advertisement.”

What PTI Govt faking through Photoshop in KPK for advertising & deceiving People, Sindh Govt has launched it long ago to serve the masses - no advertisement. #KeepTheChange #WeldoneSindhGovt pic.twitter.com/UvFzP9Jz9P

Bakhtawar Bhutto, a sister of PPP Chairman Bilawal Bhutto, also took to Twitter to take a jibe at Imran Khan, saying that the KP under Imran Khan has achieved nothing, but plagiarism skills.

Even as the PTI is found not having any direct involvement in creating such fake image, no official response to the issue has been received so far. Perhaps the party chairman will give a clarification in his next jalsa (public gathering)!