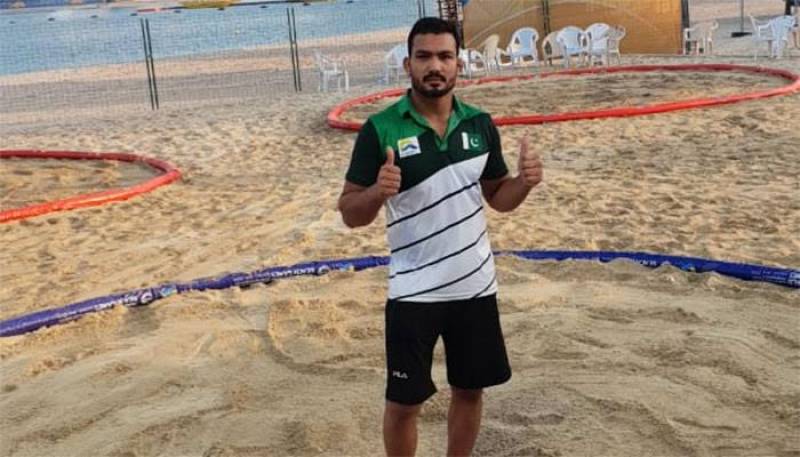 LAHORE - Pakistan's World Beach Games gold medal winner, ace grappler Inam Butt was given a hero's welcome on his arrival back home here on Wednesday at the airport.

Inam made the entire nation proud by winning the gold in 90 kgs category at World's premier beach event in Doha, Qatar.

Inam was profusely garlanded and rose petals were showered on him as soon as he stepped out of the arrival lounge, amid slogans by a diehard crowd.

'Winning gold at World Beach Games is like a long-awaited dream coming true and it is one of the most memorable achievements and feeling of my wrestling career', he told APP after his arrival.

Inam said winning the final bout against Georgian Dato Marsagishvili was an unbelievable achievement as he was two points down in the start.

"If you ask me I did not lose heart and hope to be two points down, I had a strong conviction deep inside that still I can win",he said adding " The last fifteen seconds of the bout were the most thrilling and dramatic as I got hold of Dato and took him down to sand to get five points and ensured the 5-2 win".

"It was a very tough fight and I came out of jaws of defeat to strike a win which has brought a smile on the face of people of Pakistan ", he said.

When asked about the proud moments of his success, he said running around the arena and raising the Pakistan flag were such ever last moments.

Inam on his way to the gold, beat Spain's Pedro Jacinto Garcia Perez 3-0 in the semi-final, before winning all of his four group matches.

He started his gold run in the event by beating Adao Rafaal , then outclassing wrestlers from Georgia, Turkey and Azerbaijan in coming bouts.

"The whole event (all the bouts) were quite challenging and tough and a test of my power and technique and thanks to Allah I was able to overpower all of my respective opponents", he added.

"If you look at the final, contrary to the other bouts, I had a bad start but managed to make a come back with greater confidence and ability and brought Pakistan's flag on top", he asserted.

He expressed his gratitude to the people of Pakistan, his family members, officials of the PWF , Ring of Pakistan and his fans for their prayers for his success.

Secretary, PWF, Arshad Sattar, who accompanied Inam as manager during the grand event termed the success of country's most respected wrestler's achievement, "An unbelievable performance and a brave act of courage and skills".

He said Inam accomplished a difficult task by overpowering his opponent in the final."He is a very talented grappler who is mentally tough and smart and he beat his overjoyed opponents in a rare guard action to take control in dying moments of the bout", said Arshad.

He said the Inam's victory has added to the pride of the country and will go a long way in the further promotion of wrestling in Pakistan.