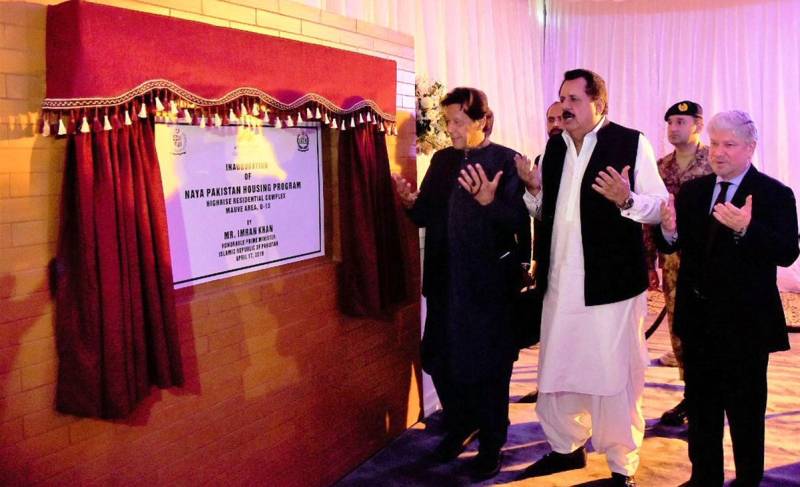 The scheme was launched at an event held in Islamabad where Housing and Works Minister Tariq Bashir Cheema, Finance Minister Asad Umar and various other government officials were also present.

Addressing the ceremony, the premier expressed that housing schemes would be launched across the country reiterating his vision to transform Pakistan into an Islamic welfare state.

"I decided to initiate this Housing Plan only to benefit our poor class. Multiple investors are taking an interest in it. We would love if the private sector comes forward," said the premier and asserted that the project is just the beginning.

The prime minister said the government had set a target of building five million homes, reminding that the country was facing a deficit of 10 million homes.

Imran Khan shared that 25 thousand flats would be constructed in Rawalpindi and Islamabad.

"Allah has bestowed us with an opportunity to take Pakistan ahead. We shall facilitate the residents of Katchi Abbadi [slums] and benefit our underprivileged class," the premier said.

'One hundred thousand flats would be erected in Balochistan,' the premier announced and added that interest-free loans would be offered to the needy for construction of homes.

The prime minister said he had been witnessing ups and downs in his entire life and [this] propaganda against the govt is being peddled by the opportunists who had been laundering massive money in the past.

The premier fired a broadside at the corrupt class saying, the class does not want Pakistan to flourish as their own interest and Pakistan's one are poles apart.

PM Khan shared that he was mocked at when he started Shaukat Khanum Memorial Cancer Hospital, but he carried on with a firm belief that one can put in effort only, success comes from Allah.

According to Radio Pakistan, One hundred and thirty five thousand houses will be built in the first phase of what is one of federal government's flagship projects.